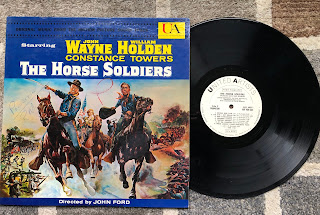 When it comes to Westerns, I’m more a fan of the traditional lone gunman or cattle ranch story, so The Horse Soldiers (1959) is one of those John Wayne Civil War Cavalry pictures I ignored for too long.

Directed by John Ford—whose family fought on both sides of the war—The Horse Sholdiers stars John Wayne, William Holden, and Constance Towers, with a score composed and conducted by David Buttolph.

It’s the story of Col. Benjamin Grierson’s voluntary, and triumphant, raid into Confederate territory, based loosely on a 1956 fictionalized account by Harold Sinclair.

Much of my vinyl collection is made up of white label promotion records, given away to radio stations. I was fortunate to find one of these DJ copies of The Horse Soldiers, and it’s a rousing collection of martial tunes. No elevator muzak here, folks. This is blood churning stuff.

It starts with a robust version of “Dixie,” heavy on the horns and follows immediately thereafter with the film’s signature theme, “I Left My Love.”
With vocal arrangements by Gus Levene and the actual singing performed by Buttolph’s chorus, it’s a real toe-tapper that I wouldn’t have guessed was specifically written for the picture.

“I Left My Love” was composed by Stan Jones—who more famously wrote “(Ghost) Riders in the Sky”, while the second original piece, By the Campfire was written by Buttolph. Jones also makes an uncredited appearance in the opening of the film as Ulysses S. Grant.

The balance of the soundtrack finds Buttolph exploring the roots of authentic Civil War songs. Some of the pieces, like “By the Campfire” and “Lorena,” were actually sung by both sides in the war. The North and the South similarly shared a common tune with “When Johnny Comes Marching Home Again,” called “We All Went Down to New Orleans” in the Confederate States.

Buttolph scored 300 movies in his career, most notably arranging the Alfred Newman score for The Mark of Zorro in 1940. He composed music for TV’s Lone Ranger, and wrote the theme for Maverick with James Garner.

If you’re in the mood for a robust, uplifting listen, the soundtrack for The Horse Soldiers is a winner.

Posted by Richard Prosch at 1:08 PM