Instead of writing about an April-in-history topic, I’m sharing this delightful bit of movie trivia about four movies with the same basic plot of villagers hiring warriors to defend their towns from returning marauders.

Even if you haven't watched these movies, you're probably passingly familiar with the titles. 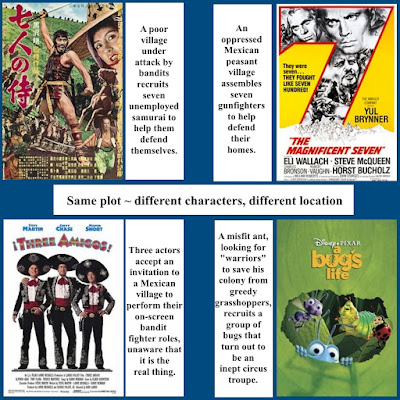 A little more about each movie:

Seven Samurai is an epic samurai dram film that takes place in 1586 during the Sengoku Period of Japanese history.Read more HERE.

In 2013, this movie was selected for the U.S. National Film Registry by the Library of Congress as being “culturally, historically, or aesthetically significant”-Read more HERE

Contemplate this movie with Robin Williams and Bill Murray in it. Over-the-top comes to my mind.

While the film was purportedly inspired by the Aesop fable, The Ant and the Grasshopper, the underlying plot is the same as Seven Samurai. Read more HERE.

Since we're all engaged in variations of sheltering-in-place, enjoying a few hours of comparing and contrasting the plots and characters in these four movies would provide an entertaining diversion.

Do you know of other movies with the same basic plot?