Carl Everett Allen recounts the series of events that began on August 12, 1884 and primarily concern John Russell—who had many names, but Allen besides to call him Hombre, which “Henry Mendez and others called him sometimes, and just means man”— in what many call Leonard’s best western novel (1961). 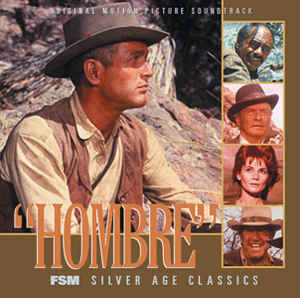 Music for the film was scored by David Rose, an odd choice in my book, considering his previous work, primarily as musical director for the Red Skelton Show on television.

An American songwriter, arranger, and orchestra leader best known for composing “The Stripper” and “Holiday of String," he also wrote music for Bonanza and other TV shows under the pseudonym Ray Llewellyn.

In film, Rose originally composed the music for 1955’s Forbidden Planet with some electronic elements. After hearing an all electronic score by Louis and Bebe Barron, the producers fired Rose. According to legend, the composer later destroyed his original recordings for the movie, but incidental tracks can still be found in other work he did, and on the internet.

In his work for Hombre, Rose carries through with all the dark revisionist western tropes of the time. For the main title theme here’s a strong sense of nostalgia in those strings, and loss for a West that is fading away.

But even in the more upbeat “Stagecoach” composition, there’s a melancholy that foreshadows Rose’s work on the 70’s TV drama, Little House on the Prairie.

Set alongside The Undefeated in a 2000 release by Film Score Monthly, music from Hombre is available in its Silver Age Classics line on CD from the FSM website.