Bob McKee- Did you know?

Western Fictioneers is excited to share another author interview with one of our members. Today we are spending some time with Robert D. (Bob) McKee. 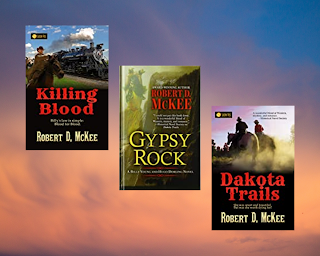 Those of us who write sometimes know from the start that it's our calling, while others need a lightning bolt to hit them. When did you realize you wanted to be a writer?

I would say the seed was first planted when I was fourteen or so. I had always been a reader, but it was about that time that I became an “avid reader.” I gulped down everything I could get my hands on. Then, at about sixteen, I came to realize that some of the people I was reading were better writers than some of the others. There really was a difference. From then on I honed my reading list. At some point, I told myself that “I think maybe I could do this,” but it was another twenty-six years before I seriously gave it a try.

Did you choose the genre you write in or did it choose you?

I guess I’m not sure what the answer to this question is. No matter what genre I’m writing, I’m writing mysteries. My published novels are Westerns, or, since mine are not traditional Westerns, the publisher refers to them as Frontier Fiction. They all take place in the West between 1880 and 1900. Even so, they are all, to one degree or another, mystery/suspense/thriller. I’m not sure I can write anything else, so I suppose it has chosen me.

Some say we tell the stories of our lives when we write. Do you think your life experiences influence or hinder your writing.

In the sense of technique and style, my life experiences very much influence my writing. I spent thirty-seven years as a court reporter. During that time, I listened to and wrote the words of literally thousands of deponents and witnesses. The question-and-answer format of a courtroom is, most of the time, conversational. Because of that, I have listened very closely to millions of words of conversation, which has given my dialogue, I think, a more realistic and natural sound. At least it has given me the “ear” to recognize when my dialogue sounds stilted or forced and lets me know that the scene needs another trip or two through the word processor.

Where did you get the idea for your latest release?

My latest release is a very nice paperback edition—put out by Sundown Press—of my novel, Killing Blood, which first appeared a few years ago in hardback, published by Five Star Press. To the question of where did I get the idea, I don’t get an idea—not a big, novel-sized idea, anyway. I get the idea of a very basic protagonist, and I get the idea of a very basic place and the situation in which to put him. I then watch what he does and write it down. Eventually, after following him around for 70 to 80,000 words, I have a novel.

The eternal question, are you a plotter or a pantser?

I am not a plotter. For years I wanted to be. I thought you couldn’t write a novel unless you first outlined a plot or at least laid out a five-to-ten-page plotline or plotted in whatever way the particular book I was reading at the time on “how to write a novel” told me to do it. The only thing I learned from all that was that I couldn’t do it. And because I couldn’t do it, I was years later than I should have been in getting a book finished. At age forty, I decided it was time to start trying to write or give up on the idea. So, since I knew I couldn’t write a novel, I began with short stories. I didn’t need to outline the plot of a story; I could merely start writing and see what happened. After five years of that, my stories began to get published and even win a few prizes. I eventually had the thought of trying the same process with something longer, and it worked.

A writer does not need to know where his story is going when the story begins. If you do, great, but it’s not required. In fact, I believe allowing your characters to decide what happens next makes the writing more organic.

Do you have a writing routine you follow or do you write when the muse strikes?

For me, there is no muse who, with a lightning bolt, sends me an idea. That doesn’t mean there’s no such thing as a “muse,” but my muse chooses to sit in the chair next to me, and she makes suggestions along the way.

If you had a choice, which is your favorite to write, short stories, novellas, or full-length novels?

This is not something I came up with. I heard it, and I don’t remember where or from whom, or if this is even the exact quote. But here goes:

“A man asked the novelist why he writes novels, and he answered, ‘Because I’m not talented enough to write a short story.’

“The man then asked the short story writer why he wrote short stories, and he answered, ‘Because I’m not talented enough to write poetry.’

“The man then asked the poet, why he wrote poetry, and he answered, ‘Because I’m not talented enough to write haiku.’ ”

That doesn’t precisely answer the question, but I like the quote, so I threw it in.

Thank you for a fun interview. For those who would like to know more, you can visit Bob's website: https://robertdmckee.com/  You can also find his books on Amazon: Killing Blood , Gypsy Rock - Large Print , Dakota Trails

Watch for more Western Fictioneer author interviews in January and the rest of 2021.