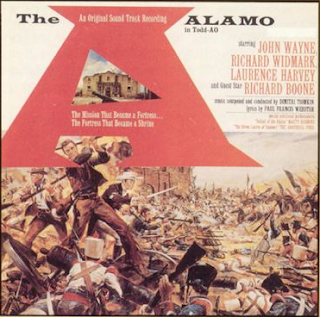 As far as John Wayne movies go, The Alamo (1960) ranks pretty far down the list—somewhere near The Cowboys, the other Wayne film where we see our hero meet his maker.

Still, I can’t deny The Alamo is a classic Western film, and it’s not because Wayne directed it. While the cast of Richard Widmark, Laurence Harvey, Richard Boone, Joan O’Brien, and Chill Wills put in some stellar performances —for me it’s Dimitri Tiomkin who steals the show with the score.

I mentioned Tiomkin briefly before for his 1953 Academy Award won with Ned Washington for the original song from High Noon, “Do Not Forsake Me, Oh My Darling” sung by Tex Ritter.

For the Alamo, he again received an Oscar nomination (with Paul Francis Webster) for a song, “The Green Leaves of Summer,” sung by the Brothers Four. While it didn’t win the award, the score as a whole won a Golden Glob Award.

The “Ballad of the Alamo” performed by Marty Robbins is another well known song from the soundtrack, and it’s been voted one fo the Top 100 songs of all time by members of the Western Writers of American.

There’s more to like than just these popular tracks however. Tiomkin does a remarkable job capturing the brooding flavor of the Alamo’s story, introducing Mexican / old west flourishes at various intervals, and rising to rousing heights when the narrative demands it.

I like The Alamo soundtrack as much as any of the scores I’ve written about, and would easily put it in my top five. Give the embedded video and listen and see if you don’t think so too.
Posted by Richard Prosch at 12:30 AM