BEAT to a PULP: ROUND ONE 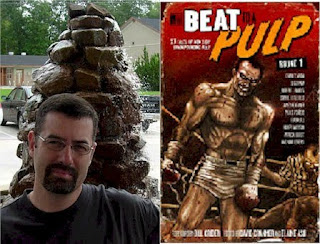 By David Cranmer
I’m involved in putting together a print anthology that will hopefully be of interest to western aficionados and to pulp fiction fans in general. At just under 400 pages, BEAT to a PULP: Round One is a gargantuan collection jam-packed with twenty-seven stories running the gamut of crime fiction, noir, sci-fi, hardboiled, western, literary, ghost and fantasy genres as well as a foreword by Bill Crider and a history of pulp by Cullen Gallagher.

For western enthusiasts is the inclusion of three gunslinger adventures. The first by Scott D. Parker is “You Don’t Get Three Mistakes,” a fast-paced oater in The Wild Wild West style with a twisty ending. The next sees the return of Cash Laramie, who made his first appearance in A Fistful of Legends, in a traditional western called “The Wind Scorpion” by Edward A. Grainger where revenge comes in unexpected forms. In the third story, if you favor the genre turned upside-down and inside-out, Chap O’Keefe sends everyone’s favorite outlaw through space and time in “The Unreal Jesse James.”

Authors well-known for their westerns, and writings in other genres too, have stepped onboard with some brain-teasing, spine-tingling tales for Round One. Ed Gorman weaves a psychological yarn about a broken-down marriage and infidelity called “Killing Kate.” Robert J. Randisi brings back Miles “Kid” Jacoby where the detective gets in deep with a case involving the paparazzi in “Crap is King.” Then James Reasoner takes us to Pearl Harbor where a beautiful nurse carries a deadly scent of “Heliotrope” for a haunting tale.

Plus there is an original short story by pulp legend Paul S. Powers. Mr. Powers had a prolific and successful career in pulp fiction, writing over 400 stories for such magazines as Wild West Weekly, Weird Tales, Thrilling Western and dozens of others spanning four decades. His granddaughter Laurie kindly supplied us with the never-before-published “The Strange Death of Ambrose Bierce.” Mr. Powers’ brilliant homage to the fiery editor and writer Bierce grounds our anthology and bridges pulp-of-the-past to the present.

I had hoped for an August release, however, due to some last minute additions to the cover design, we are looking at middle to late September but the extra time will be well worth the wait. Credit for the sensational cover goes to James O'Barr of The Crow fame and John Bergin.

A complete list of authors and story titles can be found on the BTAP website ( http://www.beattoapulp.com/roundone.htm ) and updates will be posted on my blog, The Education of a Pulp Writer, ( http://davidcranmer.blogspot.com/ ) as details become available. Updates will also be announced on the BEAT to a PULP Facebook page setup by Hilary Davidson and Patricia Abbott. ( http://www.facebook.com/pages/Beat-to-a-Pulp/120622367985562 )
Hope you enjoy!

Posted by Western Fictioneers at 6:00 AM