Who Am I Today? 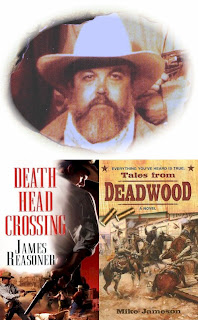 By James Reasoner
At last count, novels and stories I’ve written have been published under at least 35 different names. I say “at least” because back in the Seventies and Eighties I sold a few short stories that I never saw when they were published in various men’s magazines, but I know they appeared under other names. Some of these other identities were personal pseudonyms, some were house-names. Long before I ever became a writer, I used to read the Mike Shayne mystery novels by Brett Halliday. At that time I never had any idea that one day I would actually be “Brett Halliday”. But I was, contributing 36 novellas under that name to MIKE SHAYNE MYSTERY MAGAZINE during the Seventies and Eighties. To me, things like that are among the great pleasures of being a writer. (Along with not having to commute and being able to go to work in my pajamas if I want to, of course.)

The first Western I ever wrote was an entry in a house-name series: PECOS, #27 in the Stagecoach Station series, published by Bantam under the house-name Hank Mitchum. Since then I’ve written books in a number of different Western series, and in many cases, I was already a fan of the books before I ever joined the stable of authors. Working under a house-name has its advantages and disadvantages. The biggest disadvantage is that you receive little or no credit for the work you’re doing. Your name is nowhere on the book when it comes out, and although some people (mostly in the industry) know who writes which books, the vast majority of the readers have no idea and don’t really care. They just want an entertaining story, and I can’t blame them for that at all, since I was once the same way.

For example, back in the Sixties, I used to read paperback Westerns featuring Texas Rangers Jim Hatfield and Walt Slade. The Hatfield novels were published under the name Jackson Cole, the Slades as by Bradford Scott. I didn’t know the history of these novels, didn’t know that the Hatfields originally were published in the pulp magazine TEXAS RANGERS or that Walt Slade first appeared (although in shorter works) in the pulp THRILLING WESTERN. I certainly had no idea that the same author who wrote the Walt Slade novels as Bradford Scott (real name: Alexander Leslie Scott) also created the Jim Hatfield character and wrote many, but by no means all, of those novels by Jackson Cole. I just knew that I enjoyed the stories. The same holds true with the house-name Western series being published today. (As an aside, the Stagecoach Station series was created by long-time Western author D.B. Newton, and he was the first “Hank Mitchum”. During the Forties and Fifties, Newton wrote some of the Jim Hatfield novels for TEXAS RANGERS as “Jackson Cole”, though none of the ones that were reprinted in paperback. Still, as a fan of the Hatfield series, I found it very cool that I worked on a series created by one of the Hatfield authors and even shared a house-name with him.)

The advantages of working on a house-name series outweigh the disadvantages, as far as I’m concerned. With a long-running series, as a writer you have a vast legacy of previous books to draw on for inspiration. You have a solid, well-developed main character to work with, and yet at the same time you have the freedom to put your own spin on that character (within reason, of course). I’ve written nearly fifty novels featuring a certain mustachioed deputy U.S. marshal. In his appearance, his actions, his way of talking, are dozens of bits of influence from the other authors who have contributed to the series. Those influences combine with my own instincts as to how he should act and what he should say to create my own version of the character who is the same in many respects but subtly different in others. Those differences make it possible for me to read books in the series by other authors and still enjoy them, because they each have their own individual take on the character. You also have an established readership for these series, and your job is to entertain those readers as they’ve been entertained by previous books. It’s a challenge, but for me, a very enjoyable one.

Speaking of challenges, when you’re writing quite a few books under different names, often different types of books, sometimes you actually can get confused about who you are and what you’re supposed to be doing that day. Years ago, I was working on a novel set in Old Testament times while having a Western novel also underway. I was talking to the editor of the Western novel on the phone and mentioned that I had to be careful not to have the hero of the Biblical novel say, “Well, I reckon I’m gonna go slay me some Philistines.”

In the past month I’ve worked on projects that will be published under four different names, none of them my own. People have asked me, “How can you write a book knowing that your name won’t be on it?” For years my standard answer was, “I don’t care as long as my name is on the check.” Of course that’s not completely true, now or then. Writing has been my job for more than three decades now, and getting paid is important. But most writers love to see a new book with their name on it, and I’m no different. If we didn’t have egos, it probably wouldn’t even occur to us that people might want to read what we write, would it? I’ve been blessed with the ability to put those feelings aside when I’m working, at least to a certain extent. When I’m sitting at the computer, the words appearing on the monitor are my words. The book I’m writing is mine. When it’s published, my name may not be anywhere on it, but that has no bearing on the writing itself. I know it’s good, and I feel a surge of pride when I see the books in the store and know that people are reading them and enjoying them. So when you come right down to it, the answer to the question “Who am I today?” is simple and always the same.

I’m a guy writing a book, spinning a yarn. That’s all I ever wanted to be.
Posted by Western Fictioneers at 6:00 AM