Some of the students of America’s one-room schoolhouse include such famous and scholarly notables as Abraham Lincoln, Herbert Hoover, Joyce Carol Oates, and Laura Ingalls Wilder.

In an era that still promoted child labor, the concept of universal education seemed contradictory.  However, when the people of America moved west to fulfill their dream of land ownership, they also carried the desire to educate their children. When the Homesteaders Act of 1862 promised 160 acres of free land to anyone willing to work it, men and women flocked to the west in a steady flow. On the Oregon Trail alone, over 400,000 hopeful pioneers crossed the United States for the land giveaway. Some had never farmed, and the first five years sometimes proved successful for some, while they proved disastrous for others. However, most of these intrepid men and women shared two common goals: the desire to own land and the desire to educate their children. While much has been written about the Homesteaders Act and farming and ranching, little has been written on the main institute of education, the one-room schoolhouse.
As communities sprung up, so did the one-room schoolhouses. Some more prosperous communities were able to build one school every 2-4 miles apart as the population of the community grew. Morgan County, Colorado, as an example, boasted over 100 one-room schoolhouses in its county alone. Other one-room schoolhouses built throughout the West survived well into the 1960s and 1970s and some are still being used. The architectural design of the schoolhouse reflected the community and the available resources.
Teachers received a salary based on their education and merits (the number of students remaining at the end of the year). Their students ranged from kindergarten or 1st through 8th Grade. The “Three Rs: Readin’, Ritin’, and Rithmatic” were the foundation of the curriculum. These teachers represented every level of education. Some were the brightest and the best students of their own schools, teaching at age 16 or younger while other teachers were graduates of teaching colleges or Normal Schools. Communities preferred men over women even though pay for men was higher (what else is new?). 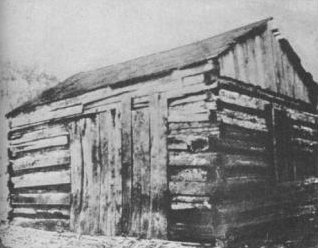 However, the 3Rs weren’t always taught in the ways most readers remember from their own school days. Some of the earliest one-room school houses were wood, with dirt floors, and few if any windows. They were called ABC or “blab houses.” Often these schools had no paper, no blackboards, and no books. Therefore, all teaching and learning were done orally. The teacher would read a line, and the students would repeat it loudly. If students weren’t loud enough, the teacher encouraged their educational enthusiasm with a switch or paddle. The qualification for “blab teachers,” was the ability to read. The above picture is the 1822 blab house school in New Salem, IL, that Lincoln attended.
The story of Abraham Lincoln reciting his homework as he walked home from school or work was no tall tale. This was how students in the New Salem “blab school” learned. As for actually learning to read, according to Angle (1990), “Lincoln learned first from spelling books. It was customary to learn first to spell all the words of the spelling books and recite several times before advancing to read other books. Lincoln studied Dillworth's Speller and Webster's Old Blueback. Later he advanced to reading Murray's ‘English Reader.’” At that time, many educators felt if you could spell it, you could read it.
Since most schools had few books if any, sometimes the teachers would resort to reading lines out of the New Testament. Though we often hear of the McGuffey’s Eclectic Reader, many of the early or isolated schools had neither the awareness nor resources to purchase these books. Many schools made do with whatever they could.
Due to lack of money and transportation, change came slowly to the one-room schoolhouse. Children continued using writing slates instead of paper since paper was costly, and only the very wealthy could purchase paper and pencils, let alone manufactured pencils. One of the problems from the use of slate was that teachers had to go around and write the assignment on each of the students’ slates. This proved inefficient and time consuming. Eventually, because of the railroad and improvements in travel and shipping, other “luxuries” became available. The classroom blackboard became affordable and accessible to all schools, replacing painted walls, and the instruction in classrooms improved. If a school had the resources, it often purchased a map for the front of the schoolroom, creating the classroom we most often see in Westerns. 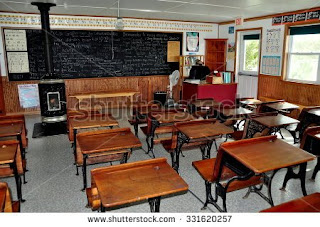 One-room schoolhouses are rare these days (though not extinct), but they served their students well. They educated the majority of Americans for almost two hundred years, providing enough of an education in the 3 Rs that generations would be able to run farms, ranches, and businesses in the agrarian United States. These one-room schoolhouses also provided work and opportunities for intrepid men and women willing to leave their homes and travel to new and distant places.
Sadly, like today, not all of the students graduated. Some of the factors that contributed to student drop-out included distance from home, learning issues, lack of support by family, need to work, etc. However, the vast majority of rural Americans received enough education from these one-room classrooms and their teachers to enable them to be successful in their communities and lives.

Rocheleau, Paul, and Klinkenborg, Verlyn. (2003). The One-Room Schoolhouse: A Tribute to a
Beloved National Icon.