Dodge City and Me

Dodge City and Me

Troy D. Smith
I love me some Gunsmoke. 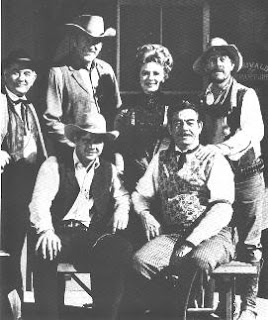 And I’m clearly not the only one. Gunsmoke is the
longest running dramatic series in television history
–broadcast from 1955 till 1975, for a total of 20 seasons.
Law and Order, a show I also love, managed to tie this feat
–but with a caveat. The cast of L&O turned over several
times during its run, with none of the original ensemble
group making it the whole time. In fact, the longest tenure
of any original first-season L&O character was five seasons
(Mike Noth’s Det. Logan, although he did appear several
seasons in the spinoff Criminal Intent.) 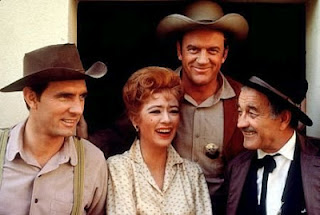 On the other hand, the four main characters introduced
in the first episode of Gunsmoke had staying power.
Marshal Matt Dillon remained the central protagonist for
all 20 seasons. Doctor “Doc” Galen Adams also appeared
for 20 seasons, although he missed most of Season 17 due
to heart surgery. Miss Kitty made it for 19, leaving before
the final year. Even the short-timer, Chester Goode, made
it partway into the ninth season. 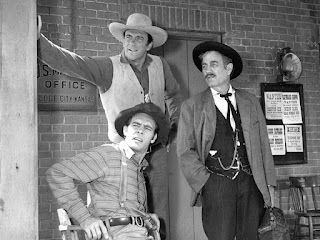 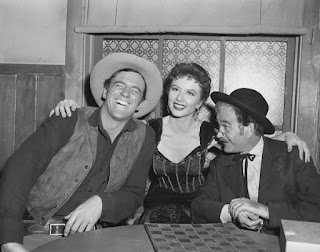 Kelsey Grammer’s “Frasier Crane” character tied Matt
Dillon for longest run of an actor in a television role
–but there is a similar caveat there. Frasier was not
introduced on Cheers until the third season, and for two
years was only a recurring guest rather than a featured
cast member. James Arness brought Matt Dillon to the
small screen as the main character of a program for
twenty consecutive years –plus a series of TV movies,
from 1987 till 1994. So in a way, James Arness played
Matt Dillon for closer to 40 years. 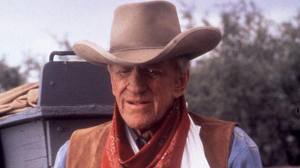 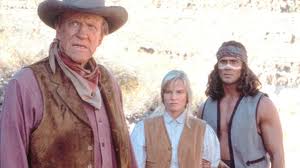 But even twenty years is a big chunk of time. When
Gunsmoke premiered my father was eleven years old.
When it was cancelled I was almost eight –and when
the final TV movie featuring retired marshal Matt Dillon
aired, I was 26 and a father myself. To this day, love of
Gunsmoke continues to be one of the bonds between my
father and me, and we discuss it often.


I remember watching “The Deadly Innocent” with my
grandma –and IMDB.com informs me this was on
Dec. 17, 1973. I distinctly remember watching “The Tarnished
Badge” –in which Victor French, whom I recognized as the
kindly Isaiah Edwards from Little House on the Prairie, played
a vicious sheriff that Matt had to bring to justice. The next day I
re-enacted the story with my Marx cowboy action figures on the
red clay banks behind our home (Johnny West was Matt Dillon,
and Pat Garrett was the evil sheriff.) Whenever I think of that
episode, I smell that red clay. That was Nov. 11, 1974. 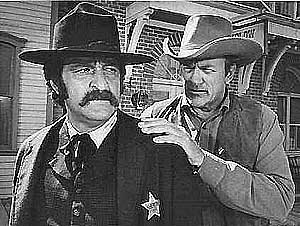 That year my mom was in the hospital for awhile. My
step-father, my older cousin, and I were on our own for
several days. I remember our efforts to make breakfast
that Sunday morning… the result being biscuits so hard
you could break a window with them, and gravy so thick
it was hard to pull the spoon out of it. And we watched
the two-part episode “Island in the Desert,” in which
Festus was held captive by a crazed prospector played by
the great Strother Martin (who had a pet rattlesnake named
Homer.) In a bizarre sort of family tradition, for years
afterward we delighted ourselves in imitating Martin’s
distinctive nasal voice: “Bite’im, Homer!” “I’ll cut ye, Festus,
and I’ll cut ye good!” That was early December, 1974. 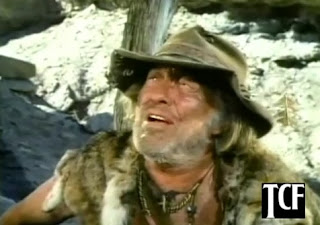 When I was 18 I had a job buffing floors at Wal-mart
–back in the days when such stores actually closed at
night, from 9pm till 9am. The floor guys would be locked
in overnight. The other floor guy became my best friend
–and he was a huge Gunsmoke fan. Syndicated repeats
showed on the local Fox outlet at 10 pm every weeknight…
when we were at work, yet before the rest of the employees
went home and got out of our way. We had a contraband
VCR tape that we kept hidden above the ceiling tiles in the
janitor’s closet… every night, just after we got to work, we’d
secretly stick it into one of the display TV/VCR’s, turn it to
the proper channel, and push record. Every morning at 2am
we’d retrieve it and watch Gunsmoke on our lunch break.
Those are some great memories. And beyond that, the steady
western diet contributed to me writing my own western stories
at night while locked in those stores, never dreaming that I
would one day be a published author. 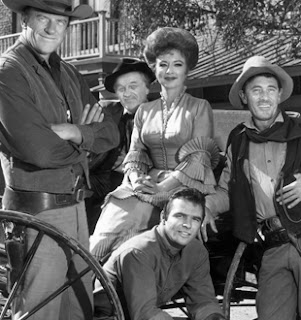 I’m willing to bet that many of you have your own Gunsmoke stories,
and I invite you to share them in your comments.