Two of the earliest posts I wrote for this blog were  entitled Dig It Out Doc. Part one was about treating arrow wounds. It was based on a paper written by Dr Joseph H Bill, published in the American Journal of the Medical Sciences in 1862. Part 2 was about treating bullet wounds. It was essentially about the methods used by Dr George Goodyear, the surgeon to the gunfighters and was based on his papers on the subject.

In this blog I am going back to the Civil War to see what the eminent surgeon, Dr John Julian John Chisolm had to say. You might find this useful in your writing about the way bullet wounds actually heal. 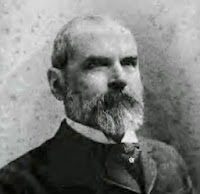 He returned to Charleston in 1860 and took up the post of Professor of Surgery at the Medical College, from whence he had graduated a decade previously. He kept the position throughout the War and in 1861 published the first edition of his textbook A Manual of Military Surgery for the use of Surgeons in the Confederate States Army. 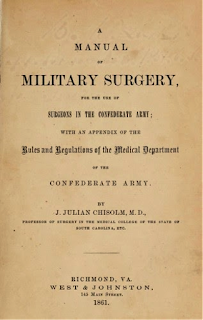 Here is what he says in his book:

In gunshot wounds the swelling of the soft parts, which commences a few hours after the injury has been received, usually continues to increase until the completion of the fourth day, when it has attained its acme, with commencing suppuration.  Should sloughing occur, it will show itself by the sixth or seventh. On the eighth or north day the slough has, in most cases, separated itself from the edges of the track of the ball, and in a few days more will have been disengaged. With the cleansing of the wound, when no complication with foreign bodies exist, the inflammation gradually subsides, the swelling diminishes, purulent discharge lessens in quantity, and the wound commences to contract. The middle portion of the track first closes, and with with utmost frequently the opening of the exit, leaving a funnel shaped canal, which diminishes from day to day, becoming more superficial, until no depth is left to the orifice of entrance. The wound cicatrizes (scars) with a depression, marking distinctly the nature of the injury which has been received. In the experience of many army surgeons the most dependant orifice heals last, without reference to the entrance or exit of the ball. Should the orifices, however, be situate at the same place, the orifice of exit is usually the first to close. This is the ordinary course which gunshot wounds take when judiciously treated in good constitutions.

In the general treatment of gunshot wounds, interfere with the general health as little as possible. The commonly prescribed antiphlogistic (anti-inflammatory) remedies are, with but rare exceptions, not required. The endless list of emetics, purgatives, diuretics, and diaphoretics, to which some European writers still cling with wonderful tenacity, can, with decided benefits, be dispensed with.

Guthrie, who represents this class, in speaking of the inflamed stage of gunshot wounds, says that the treatment for subduing this should be active: "The patient, if robust, ought to be bled (if no endemic disease prevails), vomited, purged, kept in the recumbent position, and cold applied as long as it shall be found agreeable to his feelings; when that ceases to be the case, arm fomentations ought to be resorted to, but they are to be abandoned the instant the inflammation is subdued and suppuration well established."

From this tract you can see that he strongy disagreed with Professor George James Guthrie, a British surgeon who had seen service in the Peninsula and the Napoleonic Wards and who was regard as the founder of British Military Surgery. He did not disagree with his surgical techniques, but with his use of bleeding, blistering and purging, which had been the accepted testament up until then. I will be returning to Professor Guthrie in a later post. 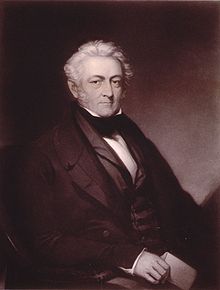 
Give them whiskey
Chisolm goes on to discuss aftercare.


We have, therefore, abandoned the plan of starving wounded men, or, by mistaken policy of a rigorous diet, to keep off inflammation. We look upon inflammation as always depressing in its character - nature requiring assistance from without to enable her to cope successfully with disease. We do not hesitate, therefore, as soon as the stage of reaction has passed, to feed the wounded with strong, nourishing diet, and also further to support the system by the use of stimuli. Whiskey has been freely given to our wounded, particularly during the suppurative stage, and with decided benefit.

THE DOCTOR'S BAG - MEDICINE AND SURGERY OF YESTERYEAR has been published by Sundown Press, available on ebook or paperback. 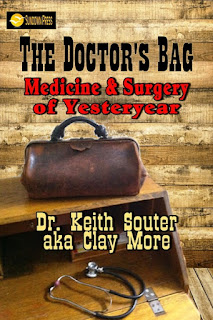