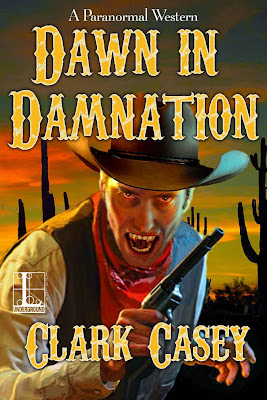 Dawn in Damnation
(A Paranormal Western)
by Clark Casey

You are safe in judging Clark Casey’s paranormal western novel by its cover. To paraphrase an early TV drama: You are about to enter another dimension. One of sight, mind, and imagination. Next stop, Dawn in Damnation.

The cover depicting a cat-eyed cowboy with bloody canines is your first hint you are at the gates of the supernatural world. The second clue is the opening lines of the novel: “What happened?” asked the young man with a nickel sized bullet hole in his temple.

Imagine a western town, Damnation, where it is always dusk, and the gathering place is a saloon, The Foggy Dew. Now imagine that the patrons of the bar, drinking, fighting, and carousing, showed up here dead. Generally, they met their demise due to outrageous violence. Now they are awaiting their ultimate destination.

Mr. Thomas, the publisher of the local paper titled The Crapper ‘cause that is where most people read it, spells out the rules this way: “If you get shot while you are here, you go to hell forever. But if you don’t, you can hang out here in Damnation as long as you like, playing cards and maybe having a go at them old churchgoing ladies. If you can make it a whole year in Damnation without shootin’ no one, the Lord’ll forgive whatever you’ve done, and the gates of Heaven will open for you. Nobody has made it yet; the record is six months.”

Fueled by an out-of-this-world imagination, Clark Casey combines vampires, werewolves, the meanest of the mean, and the dumbest of the dumb into a very readable paranormal western. 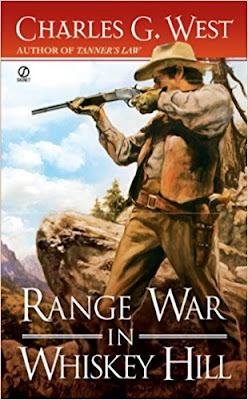 Almost ten years ago, a wild eighteen-year-old Colt McCrae was sent to jail for a crime he didn’t commit. Now he's received grim news: his estranged father has been murdered—shot in the back. His family needs Colt back home.

He returns to Whiskey Hill, Wyoming, but he’s not welcome by everyone. Colt means trouble—now more than ever. Because he knows who killed his father. Ruthless range baron Frank Drummond wants the land and will bury anyone who dares oppose him.

But now, Colt is back. And he’s no longer a kid with a chip on his shoulder. He’s a prison-hardened man with a mind for justice…

This was just a classic western!!

On the one hand you had a man who would not stop at anything to get what he wanted, while our hero had just been let out of prison for a crime he did not commit.

Throw in the hired killer, crooked sheriff and a town afraid of its own shadow and you have a good old fashioned range war.

The hero is believable and not bulletproof. I love these types of westerns and this story does not disappoint. It's just like you are watching a movie from the 50's and 60's. First Charles G West novel I have read and it definitely will not be the last.