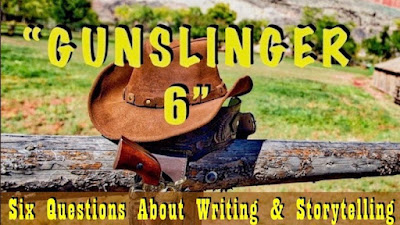 Gordon L. Rottman’s latest novel—MARTA’S RIDE—represents an excellent blend of action, adventure, and romance against a backdrop of the Texas-Mexico border in the late 1860s. 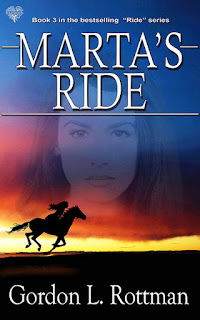 Marta’s Ride—the third in Gordon’s outstanding Ride series—features a mute 16-year old Mexican girl as the protagonist who finds herself alone after Indians massacre her family.

During her quest for survival, she meets Bud Eugen, an unemployed cowboy. Although suspicious and afraid, Marta and this young cowhand form what might be considered a cautious relationship.

As in the previous two novels, The Hardest Ride and Ride Harder, the characters in Marta face life and death choices amid a harrowing adventure pitting them against brutal weather, ambushes, attacks, and shootouts with evil bloodthirsty banditos.

Gordon gives his resourceful mute teenage heroine a powerful voice in a vivid and memorable tale of kidnapping, murder, friendship, and re-awakening.

The fourth book in the series, Marta's Daughter, is slated for publication later this year.

1. A lot of people say heroes/heroines are in short supply these days. Tell us about your protagonist Marta. And, was there a real-life inspiration behind her?

That's a difficult question. There was no one single person that inspired Marta Amora Hinojosa. She is much like my wife, but she's not as prone to violence...thankfully. Many of her characteristics are derived from my daughters and nieces. All are strong outgoing women and girls. I've spent thirty-five years on the family ranch in Mexico and have watched all these girls working and playing there, it’s a different world.
I've never bought into the concept that most women of the Old West, and especially on the Texas-Mexican Frontier, were mostly passive and subservient. There were, of course, subservient women, but there were just as many if not stronger women. If not, they would never have established a civilized society in that wild land. Marta wanted what most women wanted, security, and safe place to live. She was willing to fight for that and make sacrifices to achieve it.

2. What was the biggest challenge you faced about writing the viewpoint of a character from the opposite sex?
That's another tough one. It wasn't easy. I did not want this to be just something about how a guy thought a woman would think and react. Of course, Marta's previous life in a family of migrant workers had a big impact on how she responded. It had been a hard and challenging life living rough on the road. She's been physically and verbally abused, looked down upon, assumed to be a prostitute and thief, starved, suffered the weather, had no permanent home and had seldom spent a night under a roof. She did have a loving and hardworking family, and that brought her through many trials: How would she think, how would she deal with situations, most of which we have never experienced. 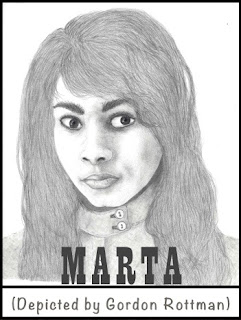 A major factor in regards to Marta is that she's mute, not because of the trauma of a murdered family, but an accident when she was nine. Being mute Marta has to find ways to express herself and being an "outspoken," and passionate girl makes that a special challenge.

Because she is forced to find ways to express herself and make her wants and needs to be known, she has become more forceful and outgoing than a "typical" 16-year old Mexican girl. Bud Eugen is quite perplexed by the feisty girl, not only because of her strong personality, but he's had basically no experience with girls.

One example, begging. Marta finds begging one of the most abhorrent tasks she occasionally has to undertake. I talked to some beggars in Mexico and once I got them to open up I was stunned that they actually had strategies and very precise do's and don'ts.

When Marta sets out to beg in a town less than hospitable to Mexicans we learn how she picks the business she would sit at with the pros and cons between businesses and even churches. Where she sat was important, how she protected herself, and what she would do when invariably chased off were on her mind. We learn what threats she was on the lookout for ranging from self-righteous white women, gangs of young boys, and stray dogs. And what would she do when a certain young out of work cowpoke who she never expected to see again showed up? Relatives enlighten me on that reunion.

While a sensitive subject, it is no secret that Marta and the other kidnapped girls were raped and abused in many ways. That, of course, is a difficult subject and writing about it is an uncomfortable challenge. I read numerous articles about depicting this in narrative writing. Most complain that authors present it no better than a porn scene and to varying degrees of explicit description. I don't describe it, you know it happens, and you see the anguish and devastation the girls have to endure afterward, and they each are affected by it and deal with it in different manners just as real people.

3. Some might consider "Marta’s Ride" a retelling of "The Hardest Ride." What’s your take on this?

Marta's Ride is in a way a retelling of The Hardest Ride but from Marta's point of view. It has given her a "voice" of sorts to tell her story--she's the narrator. It does have to cover some of the ground crossed early in The Hardest Ride, but that part's shortened and of course seen from Marta's much different perspective. Too, there are numerous events that Bud never saw and that Marta had to deal with herself. For her, it is the first time she actually lived in an Angelo environment, and there is much that is new to her, some good, some bad.

Once she and the other girls are kidnapped and taken to Mexico, it is a completely different story. There are subplots, characters, terrifying events, and places visited that are not even alluded to in The Hardest Ride. At one point she's kidnapped from her kidnappers. One event sets the stage for a future title that will come to its conclusion three years later. Marta's Ride also gives us "the rest of the story" of what happened once they returned to what Marta now thinks of as home. It provides more on this than even found in the second book, Ride Harder.

4. Tell us something we don’t know about Marta and Bud. What makes them tick? Tell us one thing about them that we don’t learn from the book, perhaps a secret in their past.

Through all three novels, we hear mention of Bud's hateful and abusive mother whom he's not seen in nine years. While he's not making any effort to find her, deep inside he would at least like to know what became of her no matter how dysfunctional she was and how dangerous life with her had been.

Bud has a soft spot in his heart, which he reluctantly admits to. If he didn't, he would have turned his back on a mute, abandoned Mexican girl. Marta has a hidden desire. She wishes to see the ocean, simply because she does not believe such a thing exists. And, eventually, Marta also wishes for a family, her own children, which she never mentions to Bud and something a simple cowpoke like him never dreamed of.

5. Your series is quite popular. Reviews are outstanding. From your perspective, how do you judge the quality of your work?

I was quite surprised at how popular the books, or rather Bud and Marta, became. I had read barely any Westerns, and the few that I had were mainly Cormac McCarthy. I do like traditional Western movies. I was putting together a story idea for a present-day story set on the Texas-Mexico border. It changed a great deal, and three factors changed it to a traditional Western: 1) Traditional gave me more flexibility in all what occurs without so many present-day real-world constraints, 2) I liked the idea of researching the period, which is not all that different than the present way of life in Morelos, Coahuila, and 3) I liked the challenge of writing a Western something totally new.

6. What was the first story you ever published and what was it like and what do you think of it now?

I'd never done any short stories until I had one punished in Sundown Press's "Sundown Western Tales." I started writing articles for military journals and magazines in 1975. That got me recognized as an "authority." My first military history non-fiction book was in 1984. I've since published about 130 military history books, mostly very dry technical subjects.

I learned how to do historical research though, which is beneficial in researching Westerns. In the early 1990s, I co-authored three Tom Clancy-style WWIII techno-thrillers, which let me put to use my training as a Soviet military specialist and later as a Special Forces and SEAL war-games writer for 11 years. (I was in the Army for 26 years, and that's a great experience for writers.)

The Hardest Ride was my first real fiction effort. I made a lot of mistakes including too slow of a start, a bit too much backstory, and included a lot of detail. Of course, that detail was beneficial too. Many reviewers like this subtle insertion of the details of what they ate, what they wore, and how they lived in the 1880s. 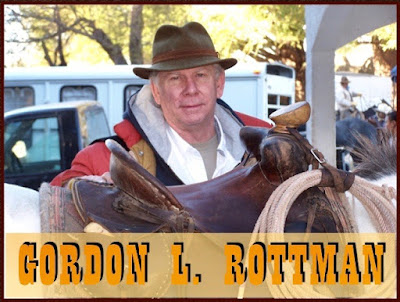 I've tried to learn and improve with each subsequent book of the Ride-series. I hope and think the next novel, Marta's Daughter, released by this summer, shows major improvement, although one of my nieces said she was emotionally and morally exhausted proofreading it.

As a bit of a preview, Marta's Daughter takes place during the Mexican Revolution. Bud is 47 and Marta 41 and makes cameos. Their 17-year old daughter, Arsenia Renee Eugen, is sucked into the storm.
_______