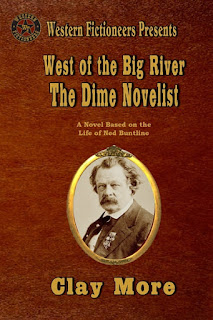 West of the Big River: The Dime Novelist
by Clay More

The historical novels in the West of the Big River series from Western Fictioneers have centered around a number of actual figures from the Old West, exploring the realities of their existence as well as some of the myths and legends that have grown up around them. Now, in THE DIME NOVELIST, the latest volume in the series, acclaimed Western author Clay More takes a closer look at someone who knew many of those historical figures and helped mold their myths and legends: Colonel Edward Zane Carroll Judson, better known to the millions of readers of his hundreds of dime novels by his most famous pseudonym, Ned Buntline.

Judson lived an adventurous and exciting life himself, running away from home at an early age to become a sailor and going on to a career packed with events. Married six times—or was it seven?—he dabbled in business and politics but more than anything else was a writer, publishing several different magazines as well as authoring millions of words of dime novels, articles, and essays. More’s narrative, as Judson reminisces about his life to a young journalist, is one fascinating and colorful story after another, most of them with a germ of truth but also a great deal of embellishment. Buffalo Bill, Wild Bill Hickok, Wyatt Earp, and many more come into and out of Judson’s life, strutting their stuff in the words of a great yarn-spinner. Judson yearned for literary success and respect that he never quite achieved, but in its place he entertained countless people who read his work.

As Ned Buntline, Edward C.Z. Judson is sometimes credited with creating the mythic version of the Wild West. THE DIME NOVELIST is a fascinating exploration of that legend and a brilliant portrayal of a largely forgotten but hugely influential figure in American popular culture. Those of us who write Westerns owe a lot to him, whether we know it or not. 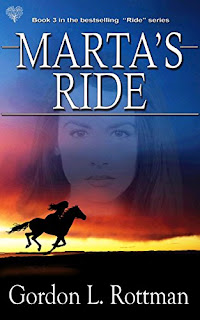 Brutal and violent, but beautifully written, Marta’s Ride is both a love story and a story of survival. The tale is told in the first person by Marta, a young, mute, Mexican girl who manages to create a “normal” life for herself in spite of the circumstances of her birth, her infirmity, and her lack of family and money. After meeting Bud, an Anglo man on the road, they become inseparable and their life assumes a semblance of normalcy as she becomes a cook and he becomes a rider for a successful rancher.  Life, however, takes a horrific turn as four young girls, including Marta, are kidnapped by a ruthless band of bandidos that terrorizes the borderlands between Texas and Mexico. Can and will Marta and the other three girls be able to survive daily assaults, rapes, hunger, and fatigue makes up the major part of this story. First person narratives are difficult to execute, but Rottman not only undertakes the task but proves to be efficacious in doing so.

For those readers who enjoy a good western; a strong, well-developed protagonist; and rich imagery, I suggest they tackle Marta’s Ride. I must warn the readers that many of the scenes are brutal, but they only corroborate the strength of Marta’s and the other girls’ characters. One caveat: do not begin reading in the evening, because you’ll be in for an all-nighter. As with so many first-rate novels, I had difficulty putting it down. 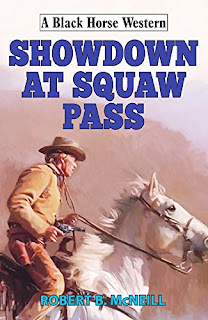 by  Robert B McNeill

When two drovers are found dead on the Western Trail near the Texas town of Cutter's Crossing, marshals Hank Ross and Abe Naylor aim to find their killers and bring them to justice. But their task is complicated when the local schoolteacher, Alice Carnaby, is kidnapped by the drovers' killer, who heads for Mexico with her. Ross and Naylor join forces with George Bowman, a half-breed Indian tracker, and set out after them. However, an unscrupulous local rancher has his own reasons for making sure the marshals don't succeed in freeing Alice, and sends four men to kill both her and the marshals. The rancher is determined there will be no witnesses - and therefore no trial …

This was a great, easy to read story with enough action to keep the pages turning.

When the son of a wealthy man takes it into his head to kill a drover who shows some attention to the woman he loves, it leads to an abduction and chase towards the border.

Except the father has his own agenda and sends his foreman after the wanted and the posse with the instructions that no one apart from his son should return.

After a bloody pursuit it all comes down to one day in court where the only thing from setting two killers free is the word of a woman.

This author knows his stuff and I'll be reading more of his stories. 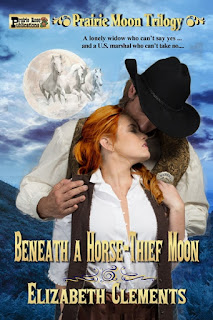 Beneath A Horse-Thief Moon

Chase Reynolds is on the trail of stolen gold -- but he runs into a woman from his past. A woman he'd long believed dead. Can he find romance with Sara again, or is she somehow involved in the theft?

This is an exciting read, with outlaws, kidnappings, missing gold and stolen horses. If you like a good romantic adventure, this is a good choice.Chase and Sara are believable characters, and you want everything to work out between them. I can tell you that you'll be satisfied with the ending without giving away any of the surprises along the way.

—J.E.S. Hays Author of Devon Day and the Sweetwater Kid: Down the Owlhoot Trail