You're Invited to a Gunboat Tea

On my first trip ever to Charleston, SC, I wanted to see as much history as we could squeeze into the few days we were there.  On our trip to the Fort Sumpter Visitor’s Center, I spotted a partial French porcelain tea set from the 1830s.

Seeing cups and saucers that would have been part of Charleston life wasn’t unexpected. However, the reason these artifacts were included in the museum was.  The set had been donated for a Gunboat fair. Families gave up their prized possessions to be sold or raffled off to raise money for the war effort, in this case, to raise funds to build a gunboat for the Confederate Navy.

Items such as a tea set, a linen fan, even a string of pearls—anything that might bring in some needed cash. Mary Boykin Chestnut, raised the daughter of a planter and married to Brigadier General James Chestnut, Jr., an aide to Confederate President Jefferson Davis, the frivolousness of such heirlooms when lives were at stake:  “Our silver and gold, what are they?—when we give up to war our beloved.” 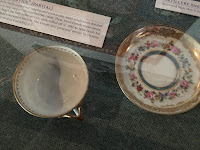