Bears of the American West

There are two species of bear found in the American West. Both species would have been very common when your characters were roaming the wilds (and not-so-wilds). 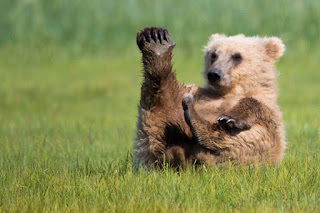 The black bear (Ursus americanus) is the most common bear in North America, found in 40 of the 50 states. If you see a bear, this is the one you’re probably looking at. Black bears can actually be many colors, from true black to dark brown, cinnamon, and even white. They might be smaller than a grizzly – but then again, they might not. Male black bears can reach up to 800 pounds in the Fall.

Black bears have a distinctive “Roman” nose profile, with the snout curving slightly downward toward the nose. They have larger, taller ears than a grizzly, and they lack the shoulder hump that the latter animal shows. Their claws are also smaller.


Grizzly bears (Ursus arctos) are also known as brown bears and are currently found only in the states of Wyoming, Montana, Idaho and Washington (as well as the wilder portions of Canada’s British Columbia, Alberta, the Yukon and Northwest territories).

Grizzlies have a pronounced shoulder hump, smaller ears and a dished or concave snout. They also have larger claws than the black bear. 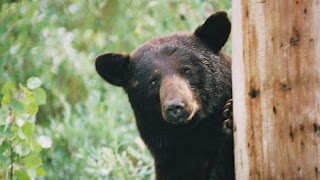 Bears are highly evolved, social animals with an intelligence similar to that of the great apes. They often share resources with one another, and form hierarchies with structured kinship relationships. They are highly predictable animals (despite what Hollywood would have us believe) and your character could easily survive a “close encounter” if he or she kept their wits about them.

Bears depend on their acute sense of smell for information about the world around them. They have a well-developed social structure that depends on scent markings. Their sense of hearing is also quite developed and, like dogs, they hear higher frequencies than humans can.

Bears can see in color and their vision is similar to our own.

Bears are also fast. They can run more than 60 kilometers per hour (37 miles per hour), faster than an Olympic sprinter. In fact, a bear could outdistance a race horse over a short distance, but it has little endurance.

They are very strong animals. Bears have been known to bend open car doors and pry off car windshields in their search for food. They routinely turn over large rocks and logs in search of food, and a grizzly’s large claws help it to dig for roots, bulbs and rodents (as well as to dig large dens in the mountainsides). 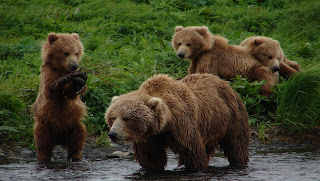 So what about that predictable bear behavior? Bears, like humans, have a “personal space” that it is unwise to violate. Unfortunately, the size of that personal space varies between bear species and individual. The best way to treat a bear is to stay as far away as you can.

However, bears are curious animals. They will inspect odors, noises and objects to see if they might be edible or “playable.” A bear on its hind legs is trying to investigate its surroundings, not getting ready to charge. They can see and hear better when they stand up that way.

If your character ventures too close to a bear and decides to climb a tree, remember that black bears are excellent climbers. In fact, one of a black bear’s first lines of retreat is up a tree, especially if it is a young bear. Grizzlies evolved in a more treeless habitat, so their first response to danger is to become aggressive, especially if you’re facing a sow with her cubs.

While bears are usually more active from dawn to dusk, in some populated areas the bears have become more nocturnal to avoid running into those pesky humans as much. They can actually be seen at virtually any time of day. They are also not territorial, however. This means that bears won’t drive other bears away from “their” hunting range. This mutual use of land and resources forms a basis for bear social behavior.

Bears can be very social, though they don’t live in packs or groups like wolves or primates. They can coexist in close proximity to one another and form alliances and friendships. Some older bears have been seen to “mentor” younger, unrelated bears and sub-adult bears often hang around in pairs or small groups. They have a dominance hierarchy based on age, size and temperament. Mature males are at the top of the hierarchy and cubs and sub-adults are at the bottom. Bears establish and maintain their social standing by aggressive behavior toward one another, but once dominance has been shown, they can become friendly with one another within the hierarchy.

Bears can become accustomed to things very easily. This means they get used to humans being around and no longer see us as a threat. This can be startling to a human wandering down a game trail looking for dinner, or picking berries in the woods. However, bears also have a “startle” response with new objects. They initially flee from something unfamiliar, but often return to investigate it more closely. This should not be seen as an aggressive behavior, but as curiosity.

Finally, remember that bears, like humans, are not always as aware of their surroundings as they should be. A bear on the trail of something yummy might literally not be paying attention to anything beyond their nose. Surrounding noises like running water or rushing wind might cover up the soft footsteps of your hero or heroine, resulting in a surprise meeting. Hopefully your character knows enough about bear behavior to survive.