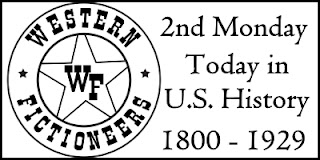 Growing up in the 1960s and 1970s, John Wayne was an important part of my life. His name was synonymous with cowboys, the Old West, and America. He WAS the Old West. He was my superhero before I knew what that word meant. I idolized him whether he played a gunfighter (Stagecoach), a sheriff who faced down the bad guys (Rio Bravo, El Dorado), an almost villain (The Man Who Shot Liberty Valance, The Searchers), or a gold prospecting, reluctant groom (North to Alaska).

He was ‘a man’s man’ from his walk to his talk. You knew where you stood with him. He was straight-forward, self-sufficient, rugged, and dependable. His signature steely-eyed expression when his eyes narrowed to slits with the warning he’d taken all he was going to take would send me scooting to the edge of my seat in anticipation of the bad guys getting what was coming to them.

As Rooster Cogburn, he metaphorically tackled Hell with a bucket of ice water when he clamped the bridle reins between his teeth and took off down that mountain slope rifle in one hand and a six-shooter in the other. What an iconic scene. (True Grit)

When Big Jake came to my hometown theater, I took my then five-year-old brother to see it. He loved it so much we went back every day for the week it played.

The night my mom took us to the drive-in to see Hatari!, my dad couldn’t go with us, because one of our cantankerous Angus cows was in the corn field and he was out chasing her around on a little Ford tractor to get her back where she belonged. The irony of the plot of the movie and my dad with his tractor that night still gives me a chuckle.

Back then, I didn’t know what onscreen chemistry meant. I just knew that John Wayne and Maureen O’Hara were the greatest movie couple. I was convinced they were married. You can imagine my shock and disappointment when I learned this wasn't the case. They were so perfect together, that this crushing reality was inconceivable to my 10 (ish)-year-old mind. When I was a little older, though, I wasn't quite so disappointed they weren't married, because I had a teenage crush on him when I better appreciated his masculine appeal.


But age and experience changes a person’s perspective. When I re-watch McLintock! or The Quiet Man I cringe at the way the male/female relationships were portrayed. I also struggle with Hatari!, although I loved this movie when my child’s eyes saw it simply as an exciting cowboy adventure in Africa. The romance between John Wayne’s and Elsa Martinelli’s characters was so much fun. But as an adult, the running down and capturing wild animals to relocate them to zoos is problematic for me.

Still, I occasionally watch these movies, because I remind myself I shouldn’t judge movies (or books for that matter) by contemporary standards, expectations, and mores. They are to be taken for the entertainment they provide and for the glimpse at a different historical and cultural time period and what I can learn from it.

It would be easy to reminisce about all of the John Wayne movies that have stayed with me through the years and also talk about how his characters influenced, in some way, every male protagonist I write: The Sons of Katie Elder, The War Wagon, Hondo, Three Godfathers, The Comancheros, Alamo…

But I won’t. Instead, I’ll end with a scene from my favorite of his movies, The Man Who Shot Liberty Valance.

On this 39th anniversary of his death, what are your memories of John Wayne?