"THE TRAIN ROBBERS" by Tom Rizzo

Engineer George Ratcliff squinted into the darkness and spotted a red lantern on the tracks up ahead. When the big unit neared a small station at Alila, California, Ratcliff applied the handbrake on the Southern Pacific train #17. 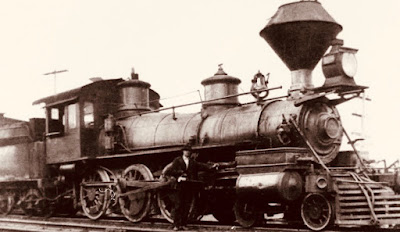 In the darkness of February 6, 1891, three masked men leaped aboard the passenger train, making its run San Francisco to Los Angeles. Drawing their guns, Bob and Gratton Dalton rushed Radcliff and forced him to halt the train.

A third Dalton brother, Bill, bulled his way into the passenger compartment brandishing a rifle and ordered everyone to stay in their seats.

Bob and Grat forced Radcliff out of the engine and shoved him toward the Express car.

At this point, the robbery attempt took a turn for the worst. Radcliff tried to take advantage of the darkness and made a run for it.

One of the brothers snapped off a shot and hit the engineer in the stomach. The Southern Pacific engineer would later die from his wound.

The bad luck continued when the Daltons reached the express unit. They ordered guard Charles C. Haswell to unlock the door. He refused.

The brothers fired several rounds of buckshot into the door. But Haswell retrieved his gun. Utilizing a small hole in the door, he returned the Daltons' gunfire.

The Dalton Brothers first-ever attempt at train robbery had failed. The trio decided to call it a night and regroup.

A posse tracked down Bill and Grat. Bob managed to escape. A court released Bill but sentenced Grat to twenty years. Grat, however, succeeded in getting away.

Southern Pacific lent some validity to the Dalton Gang by posting $6,000 rewards for each of them.

The three brothers made their way back to Oklahoma and reunited with their younger brother, Emmett. 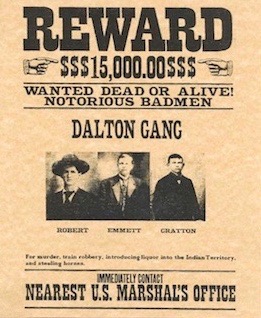 Despite the botched, the Daltons didn't decide to go straight.

Far from it. The Dalton Brothers figured there is strength in numbers and began recruiting other outlaws to join. Between May 1891 and June 1892, the Dalton Gang robbed four trains in Indian Territory.

Over the period, they stole between several hundred dollars to over $10,000.

He once boasted he could top anything the infamous Missouri bandit every did by robbing “two banks at once in broad daylight."

On October 5, 1892, the Dalton Gang rode into Coffeyville, Kansas, to rob the C.M. Condon & Company Bank and the First National Bank across the street.

Although gang members wore fake beards and other disguises, townspeople recognized them because the Daltons once lived In Coffeyville. 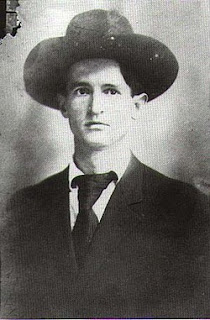 "The Last Day of the Daltons" proved a disaster with Grat and Bob Dalton, Bill Power, and Dick Broadwell killed by angry townspeople.

Emmett was shot twenty-three times but survived. He was sentenced to life in the Kansas penitentiary but won a pardon after serving fourteen years.

He played it straight the rest of his life as a successful real estate agent, author, and actor.
_______

Posted by thomasrizzo at 2:30 AM