To kick off 2019, let's take a stroll down musical memory lane, and take a quick look at the show business career of a talented man named Woodward Maurice Ritter, better known as Tex Ritter.

Tex was a popular actor and country music artist in the early years of both industries. He was inducted into the Country Music Hall of Fame, and he received a star on the Hollywood Walk of Fame. Tex was born in Murvaul, Texas and grew up on the family farm. After he graduated high school, he went to college with intent to become a lawyer. In 1928, he became interested in show business, and his law/government studies went to the back burner.

Here is a timeline highlighting his business/music career:

1936 - moved to Los Angeles
1936 - movie debut - Song of the Gringo - followed by 12 B-movie westerns (40+)
*Appeared in episodes of Death Valley Days and The Rebel
1938 - 1945 - starred in singing cowboy movies - teamed with Johhny Mack Brown (western actor) in several movies
1945 - starred as "Texas Ranger Tex Haines"
*Hiatus
1950 - returned to show business in supporting roles or performing as himself
1966 - played himself in the film Nashville Rebel (side note: Waylon Jennings was also in this movie)


Tex Ritter's contribution to the western genre--movie, television, and country music--is a legacy that I hope will never be lost or forgotten. I hope someday to visit The Tex Ritter Museum in Carthage, Texas. Here is a quote from the museum's website:

The museum started in 1993 as the Tex Ritter Museum and expanded to include friends of Tex and other Texas-born country music legends. In August 2004, the museum expanded to add a significant Jim Reeves display which features the radio equipment from Jim's radio station KGRI in Henderson.

I grew up listening to Tex on the radio or watching his western movies on Saturday afternoon matinees at the theater or on late night television. I still have two 78rpm records of his:When You Leave Don't Slam the Door/Have I Told You Lately That I love You and My Heart's as Cold as an Empty Jug/Rock and Rye. Sadly, I've lost track of my record of Blood on the Saddle. 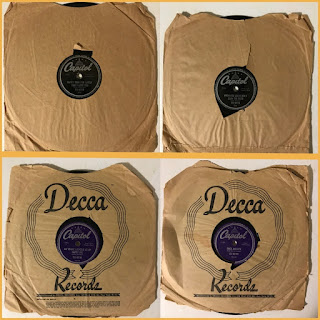 I mean no disrespect to his memory or his singing, but I cannot listen to Blood on the Saddle without smiling, if not actually giggling. You listen and let me know if you kept a straight face.

As I don’t send a newsletter, you might consider following me on these platforms:
Amazon (for new release notifications| BookBub (my book recommendations) | Blog (occasional posts)| Twitter (history trivia)


Kaye Spencer
Writing through history one romance upon a time