In 2021, February 12 marks the beginning of the Chinese New Year (also known as Lunar New Year or the Spring Festival). 2021 will be the Year of the Ox, which supposedly reflects traditional conservative characteristics. Oxen have an honest nature and are known for diligence, determination, dependability, and strength. They are not greatly influenced by others or by their environment but persist in doing things according to their  own ideals and capabilities. Oxen are not good communicators and even believe it’s not worthwhile to exchange ideas with others. They are very stubborn and stick to their old ways in most things. The lucky colors for this year are white, yellow, and green and lucky numbers are 1 and 4 (as well as numbers which contain both digits, such as 14 and 41). Unlucky numbers are 5 and 6 (and numbers containing both of those digits) and blue is the unlucky color for oxen. The next Year of the Ox will occur in 12 years, according to the Chinese lunar cycle. 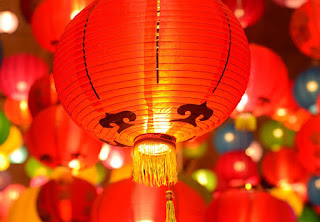 The New Year is the most important celebration in China, and Chinese Americans during the Old West would have made certain to observe their country’s traditions even though living in a foreign land. The holiday was traditionally a time to honor your household and your ancestors, as well as giving honor to the heavenly gods. This was typically a time to bring your family together for a celebratory feast.

The Chinese lunar calendar has been in existence at least since the Shang Dynasty (1600-1046 B.C.). Oracle bones that have been inscribed with astronomical information have been dated as early as 14thCentury B.C. This wasn’t a static calendar like the one we use today, but varied according to who was in power and which region you lived in. The parameters were set according to the lunar phases, solar solstices, and solar equinoxes. Although the calendar originally served as a guide for religious, dynastic, and social roles and activities, by the time of the American Old West, the New Year had evolved into more of an entertaining, family-oriented celebration.

An interesting note: San Francisco claims to host the largest Chinese New Year parade outside of Asia. They’ve held a parade since the Gold Rush era in the 1860s. 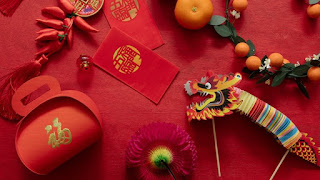 Chinese New Year typically begins with the new moon that occurs between the end of January and the end of February. The celebration lasts 15 days, until the full moon arrives for the final Festival of Lanterns. The origins of the holiday are steeped in myth and tradition, with one of the most popular involving the “yearly beast,” Nian (a word which sounds like the word “year” in Chinese). On the eve of the New Year, Nian was said to eat livestock, crops, and even people. Chinese villagers once left out food so Nian wouldn’t be hungry, but soon it was decided that loud noises and the color red would scare Nian away. This explains the red lanterns and scrolls placed on homes, as well as the popularity of fireworks to celebrate the coming New Year.

The Chinese calendar also includes the zodiac signs, 12 stations that mark the sun’s apparent pathway through the sky during the year. Each New Year is supposedly marked by the characteristics of one of the zodiac animals: rat, ox, tiger, rabbit, dragon, snake, horse, sheep, monkey, rooster, dog, and pig.

During the Old West era, Chinese Americans would have celebrated by shooting off fireworks, visiting friends and relatives, and eating dumplings. Entertainment such as dragon or lion dances and lantern shows also would have been popular as well. During this time, businesses come almost to a standstill. The focus was on home and family. Homes would be thoroughly cleaned to get rid of “huiqi” or “inauspicious breaths” that may have accumulated during the previous year. Cleaning also appeased the heavenly gods who would be descending for an inspection of their earthly temples. Once the cleaning was done, though, the brooms and dustpans would be stowed away so nobody could sweep away the coming year’s good luck. Some people bathed with pomelo leaves, as the fruit symbolizes abundance, prosperity, fertility, and good health for the coming New Year. 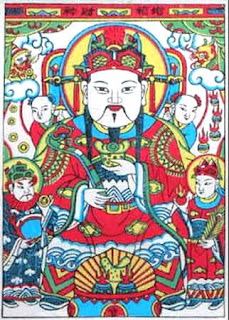 A week before New Year’s Day, the Chinese believed that the Kitchen God (Zao Jun or Zao Shen) ascended to heaven to deliver his yearly report to the Jade Emperor about the family’s behavior during the old year. Many Chinese families kept a picture or paper image of Zao Jun near their stove, and during this week his image would be burned. The rising smoke symbolized the god’s journey to heaven and firecrackers were lit to speed him along. Special food offerings were left for Zao Jun so that he would give the Emperor a favorable report.

During the 15-day celebration, ritual sacrifices of food and paper icons would be offered to the gods and the family’s ancestors. Red scrolls printed with lucky messages were posted on the family gates and fireworks would be set off to frighten away Nian and the other evil spirits. Children and the unemployed were given small gifts of money in lucky red envelopes. On New Year’s Day, every window and door would be opened to allow good luck into the home. The family would go door to door to greet relatives and friends.

New red clothing should be worn on New Year’s Day (to scare away Nian and to start the year anew), and you should also get a haircut to symbolize a fresh start. It’s unlucky to begin the New Year owing money, so most people try to pay off their debts on this day.

You shouldn’t buy shoes or trousers on New Year’s Day, though. In Cantonese, the words for “shoe” sounds like the word for “rough,” and the word for “trousers” sounds like “bitter,” so you don’t want a rough, bitter New Year. You shouldn’t wash your hair during the first three days of the celebration, lest you wash away your good luck.

One of the most important facets of the New Year’s celebration was the feasting. On New Year’s Eve, the entire extended family sat down to a large meal that included a whole chicken to symbolize prosperity and a whole fish as the final course. This fish symbolized abundance and was not supposed to be completely eaten. On New Year’s Day itself, it was considered unlucky to light a fire or prepare a meal with sharp implements that might “cut” luck away. During the first five days of the celebration, people ate long noodles to ensure long lives. On the final (15th) day, they ate full-moon-shaped round dumplings to symbolize the perfection of the family unit. 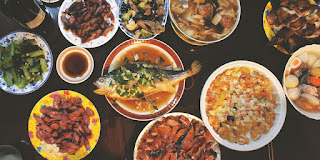 Here’s a great website showing the date of Chinese New Year and the animal associated with that year for the years 1645 to 1899 if you’d like to include some Chinese tradition in your story. (I'm a metal rat)