Write or Fall into the Abyss - Interview with Edward Massey

How many can relate to Edward Massey's feeling that you must write or fall into the abyss? Read on and learn more about Edward and his upcoming release "Founding Sheriff".  As with most interviews, we sometimes learn even more about ourselves and our desire to write than we may realize. So join me as I learn more about this 'storyteller'. 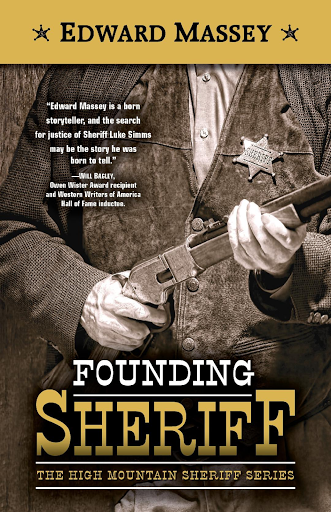 I dislike thinking that I write in the “Western genre.” It is an injustice to good Western writers who really know what they are doing. Also, it creates a veneer over my books that I fear keeps the reader from seeing that I am simply writing about men at work. (Men is in the global and includes women who are formidable, guiding characters in each of my books.) Nevertheless, to the extent my books so far have been set in the West, the genre chose me. In that regard, I am proud to say the men at work in my novels represent values that are respected and upheld in the West. When Easterners set out to push the Frontier west, the values they created in the years of effort and struggle became one of the cornerstones to our society.

Not so much a nudge as a deep, dark hole. If one can say it modestly, I have had a wonderful and privileged life, but no matter how great the achievement or the pleasure, I always felt there was an abyss I would fall into if I did not write. So, as you can see above, I quit several good jobs to write and try to avoid the abyss..

Oh, absolutely. There are two kinds of life’s experiences at work. One is the experience of having been raised in a certain social environment with its history, values, stories, icons, myths. The other is one’s specific experience, training, failures, and dreams. First, they hinder me because they whisper in my ear that I cannot do what I am setting out to do. This is an interview of its own. Then, they help me because they point to how much has been overcome to get me here. Who am I if I can’t stand up?

My latest release is Founding Sheriff, published by Five Star with a pubdate deferred by covid six months to February 17, 2021. The fact it had to be “founding” came implicitly with the concept of three sheriffs of the same family settling the same county in the same mountains over what would range one hundred years. The story came from two facts that came together and exploded like the big bang into a story. One, there was a cooper who emigrated from England to become the constable and, when the territory was created, the sheriff. Two, I have a cousin whose daughter was murdered by her husband. I asked permission to use her story and move it to 1865. Bringing the murderer to his just end required both catching him and creating a justice system. 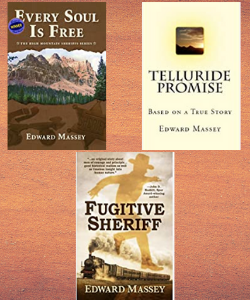 I’m not so sure I am a plotter, but I am an outliner, or at least a partial outliner. I attended a story conference by (a different) Robert McKee twenty years ago and learned about the action/event outline. A little later I discovered the addition of purpose. So, I write as much of an action/event/purpose outline as I know. I can’t say for sure that it covers the whole novel, but I try to stick at it from start to finish. Sometimes I give up and start writing the story. Sometimes the story seems to be wandering and I go back to working on the outline. By the time I have finished writing the novel, I have finished writing the outline, too. They aren’t perfectly in parallel because I wander away from the outline while writing and I don’t always go back and conform the outline to the story.

I strive to write the first four hours of every day. That usually means seven to eleven or eight to twelve. My striving runs into objecting reality. On Tuesdays, I do some paying work and do not set to writing until four, if at all. On Fridays, my brain pleads for a day off, usually loses, but sometimes wins. On Saturdays, Anne makes it very clear she wants the weekends somehow to be different from the weekdays. Two months into the advent of covid, I grew definitely to agree with her, and we work hard together to make the weekends different. Sundays, therefore, are dictated by Saturday, but generally yield a productive four hours.

I don’t think I have a choice. I write novels. Having said that, while writing Every Soul is Free, I came up with the not very original idea that I could build a little platform and a little track record by publishing some short stories. That novel lent itself to the idea and I had seven short stories published. In fact, the logic also worked because I met Duke Pennell and ESIF was originally published by Pen-L Publishing. I even wrote a short story with the same sheriff, but not at all related to the novel. It was and is my favorite short story. I could not get it published for seven years. Then, in 2020, Western Fictioneers put together an anthology and accepted “Cybil”. A truly joyous event, both having it published and being among the company of twenty-two writers Richard Prosch found/selected. I have not yet written another short story, but I am headed in that direction more than ever before.

No. I listen to them. They tell me important things, like who to trust and where to go and what to do. I also listen to them talk to other characters. But you must listen carefully. There is something about people who live in the mountains. They don’t use many words.

Mostly I have a big inventory of novels left to be written. Somehow, when I started to look, they were just there. With one exception. I was at the opera with my wife and the story started coming to me and kept coming. I wrote down everything in the dark on the Playbill. With those notes and a modest amount of research, I now have a drawer full, including instructions about research yet to dos (but no novel yet.)

In 2022, when Forever Sheriff, the third of the trilogy, comes out, I propose we turn this question into another interview for the Western Fictioneers blog.

As mentioned above, I set out to write about working men and women. My next novel is about a plumber. I hope to finish it this year and find a publisher.

Research is like a siren, beautiful and seductive. You have to chain yourself to the boat when you come near her. I set out to do the research after I do the writing. One of the problems is that if I truly know nothing about what I am writing, I cannot really write before I research Then if I start researching, I end up on the rocks. One of the tricks I have developed to protect myself is to do research only when I am moving, never when I am sitting at my desk (supposedly) writing. So, cars, trains, trips, weekends, bathrooms, stolen moments in church or meetings are all good times to research. My goal is to put enough in my head to proceed with the writing, allowing my usual approach to write first, then research.

For more about Edward and his work, you can check out the following links: