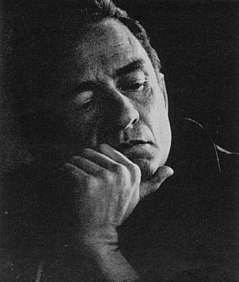 Let’s start a movement and declare his birthday National Johnny Cash Day. Everyone wears black and speaks in lyrics from his songs.

In anticipation of this day catching on, I’m showcasing two of his songs.

Don’t Take Your Guns to Town

Give My Love to Rose

But first, a bit of Johnny Cash trivia.

Don’t Take Your Guns to Town

Cash wrote this song then recorded and released it in December 1958 as the first single from his album The Fabulous Johnny Cash.

This video of Don’t Take Your Guns to Town is a student-made video, and it’s absolutely great.

Give My Love to Rose

Cash wrote Give My Love to Rose and recorded it in 1957. It eventually reached No. 13 on the Country & Western Chart. Cash recorded it several times and, for his 2002 version, he received his fourth and final Grammy for Best Male Country Vocal Performance. The inspiration for the song apparently came to Cash from a conversation he had with a San Quentin State Prison inmate who asked Cash to take a message to his [prisoner’s] wife if Cash ever went through his hometown.

This song was the inspiration for my novelette of the same name, which is included in the Prairie Rose Publications’ anthology Hot Western Nights.

Here is the beginning of my story.

“Give my love to Rose…” The dying man gripped the man’s coat. “Tell her…tell my boys how proud…how proud I am… Tell Rose not to live alone…find another man—a good man. A man like you—You stayed with me. Love her…like…like she deserves...” The fevered spark faded from his eyes. With one last burst of strength, he pleaded, “Please…don’t forget to give my love to Rose…” Hands that had done a lifetime of hard work relaxed.

“I’ll tell her,” the man said, but Lon Griffin didn’t hear him. Exhaling a long, slow breath, Federal Deputy Marshal Clint Callahan eased the dead man down to the blanket. Clint pushed his hat back and studied the man from his lawman’s well-seasoned experience with death. He’d come across all manner of dying during his career. Broken leg, gut shot, horse run off, weak heart, blizzard, poisoned water hole, robbery. It wasn’t so bad when he came up on them already dead. Their suffering was over. It was the dying ones that stayed with him—the desperation in their eyes, the regret in their voices. He’d never get used to watching a person die, especially the women and children.

What he knew for certain was the worst part of dying wasn’t the pain. It was not being able to say goodbye to the people who mattered, and that was his sole companion over every mile he rode.

How many times had he heard the last words of love for a beloved wife and children, or a wish to see a mother one last time? Some cried. Others cleared the burden on their consciences. Most only had enough time to name next of kin. When you heard a person’s last words, shared their last breath, shouldered their confessions, you took on the duty of seeing their dying wishes taken care of.

This man, Lon Griffin, was no different. He’d clung to a thin thread of life, slipping between delirium and lucidity all through the night. His will to live gave out in the dark just before the dawn.

Any other time, Clint would have dug a grave right there, said the proper words, and then rode on to tell the family or sent a telegram, whichever was the faster way to convey the news. This time, though, Lon’s widow waited at the house a good many miles on farther north, she was probably wondering right now when she’d see her husband again. She never would, not alive, anyway, and Lon begged him to take him home to be buried in the family cemetery.

Video from 'The Johnny Cash Show' in 1969 – Roy Orbison and Johnny Cash singing Oh, Pretty Woman. This is a fabulous few minutes in country music history.

Those of you reading this on your phones will likely not see the videos. Here are the YouTube urls.