On This Day in the Old West: August 13

On this date in 1860, Phoebe Ann Mosey was born. Not ringing a bell? Maybe you know her stage name better: Annie Oakley. Phoebe Ann was born in a log cabin in rural Ohio, near the border with Indiana. If you’re interested, there’s a stone-mounted plaque at the site, erected by the Annie Oakley Committee in 1981. 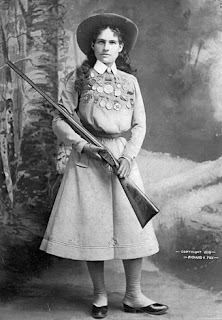 Annie’s father became invalid from hypothermia during a blizzard in 1865 and died of pneumonia in late 1866, at age 66. Her mother later married Daniel Brumbaugh and they had one daughter, Emily (1868) before Susan was widowed once again. Because of their poverty following Jacob’s death, Annie didn’t attend school regularly as a small child, although she did attend as an older child and an adult.

On March 15, 1870, Annie and her sister Sarah Ellen were admitted to the Drake County Infirmary, where they were taught to sew and “decorate” by the superintendent’s wife, Nancy Edington. Beginning that spring, she was “bound out” to a family to help care for their infant son, with a false promise of 50 cents a week and an education. The couple, who Annie never would name (calling them only “the wolves”), originally wanted an older (and larger) servant who could pump water and cook. Annie spent around two years in near slavery to them. Once, the wife put Annie out in the freezing cold with no shoes because she’d fallen asleep over her darning. Around the spring of 1872, Annie ran away, living for a time with the Edingtons and returning to her mother’s home at age 15. 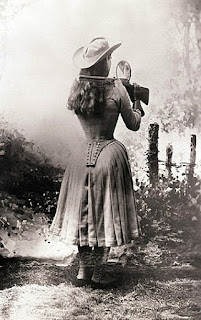 Annie began trapping before the age of seven to support her siblings and widowed mother. She learned to hunt and shoot before eight. She sold the game to people in Greenville like shopkeepers Charles and G. Anthony Katzenberger, who shipped the meat to hotels in cities like Cincinnati. Annie also sold meat to hotels and restaurants in northern Ohio. Her skill paid off the farm’s mortgage when she was around 15.

Annie became well known in the region for her hunting skills. At one time, the Baughman and Butler shooting act was performing in Cincinnati. Marksman Frank E. Butler (1847-1926) placed a side bet with hotel owner Jack Frost: $100 that Butler could beat any local fancy shootist (that’s the modern equivalent of $2,400). Frost arranged a match between Butler and Phoebe Ann, saying “The last opponent Butler expected was a five-foot-tall, fifteen-year-old girl named Annie.”

After missing on his 25th shot, Butler lost the match (one account has him hitting the bird, but it fell beyond the boundary line and so was disqualified). He soon began courting Annie and they married a year later. According to a modern-day account in The Cincinnati Enquirer, it’s possible that the shooting match actually occurred in 1881 rather than the often reported 1875. The Annie Oakley Center Foundation has stated that Annie and her mother visited her sister Lydia, who had married and moved near Cincinnati, in 1875, but this could not have been correct, as Lydia did not marry Joseph Stein until 1877. It’s more likely the women visited in 1881, when Lydia was ill with tuberculosis. Also, in 1875, the Bevis House Hotel was still being run by Martin Bevis and W.H. Ridenour. Jack Frost didn’t take over until 1879. The Baughman and Butler shooting act was first mentioned in The Cincinnati Enquirer in 1880. 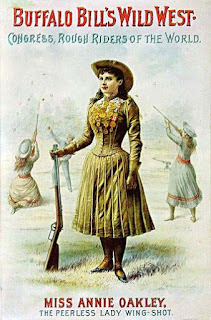 Regardless of the actual date, Annie and Frank were married the year afterwards. Some sources claim the date was August 23, 1876, but there is no recorded certificate to validate that claim. A certificate on file with the Archives of Ontario, Registration Number 49594, reports that Butler and Oakley were married on June 20, 1882 in Windsor, Ontario. Also, throughout Annie’s show-business career, the audiences were led to believe she was five or six years younger than her actual age. The later marriage date would better support this fictional age.

Annie and Frank Butler lived in Cincinnati for a time, in the Oakley neighborhood. It’s believed that Annie took her stage name from that neighborhood. They joined Buffalo Bill’s Wild West in 1885, and Annie was given the nickname of “Watanya Cicilla” by Sitting Bull. This was translated in the public advertisements as “Little Sure Shot.”

Annie worked with the show for a time, but tense relations between her and a much-younger rifle markswoman, Lillian Smith, led her to leave. Once Smith left the show in 1887, Annie returned, in time for the Paris Exposition of 1889. The three-year tour cemented Annie’s fame as America’s first female star. She earned more than any performer in the show save Buffalo Bill himself. Annie also performed in other shows on the side for extra pay. In Europe, Annie performed for Queen Victoria, King Umberto I of Italy, and other crowned heads of state. Supposedly, she shot the ashes off a cigarette held by newly crowned Kaiser Wilhelm II of Germany, at his request. 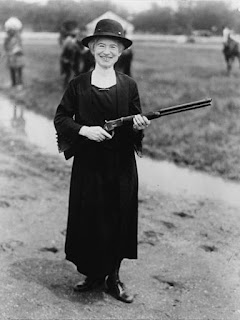 From 1892 to 1904, Annie and Frank lived in Nutley, New Jersey. Annie promoted the service of women in combat operations for the American armed forces. She wrote to President William McKinley in 1898, “offering the government the services of a company of 50 ‘lady sharpshooters,’ who would provide their own arms and ammunition should the U.S. go to war with Spain.” The Spanish-American War did occur, but Annie’s offer wasn’t accepted.

In 1901, Annie was badly injured in a train accident, and only recovered from her partial paralysis after five spinal operations. She left the Buffalo Bill show for a less taxing career in a stage play, The Western Girl, written especially for her. Annie played the role of Nancy Berry, who used a pistol, rifle, and a rope to outsmart a gang of outlaws. Throughout her career, Annie taught women to handle guns. It’s believed she taught more than 15,000 women. Annie said, "I would like to see every woman know how to handle guns, as naturally as they know how to handle babies."

Annie continued to set shooting records into her sixties. She and Frank moved to Cambridge, Maryland and, in 1917, to North Carolina. Annie also engaged in extensive philanthropy for women’s rights and other causes for women. Her health declined in 1925 and she died from pernicious anemia in Greenville, Ohio at the age of 66 (November 3, 1926). Frank was supposedly so grief-stricken that he stopped eating, and he died 18 days later. The couple is buried in Brock Cemetery near Greenville.

If you have characters from this period in history, especially if they’re women, they could easily have seen or met Annie Oakley. Perhaps she even taught them to shoot or inspired them to stand up for better women’s rights. She was still actively performing until close to her death, so your characters could have seen her almost any time between 1870 to 1925. What an amazing life she lived, and what a wonderful side character she would make for a story.