I was the company Historian for Levi Strauss & Co. in San Francisco for 25 years, and one of my duties was to research the life of the founder, Levi Strauss. This wasn’t easy, because the company lost all of its records in the 1906 earthquake and fire. But once historical newspapers became available online, I was able to track Levi down and I found a few stories that were not the traditional tales of his business, the blue jeans, or his philanthropy.

For example, the time one of his customers threatened to kill him. 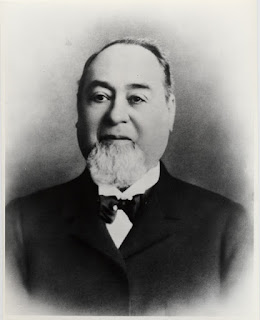 Antonio Gagliardo owned a retail dry goods store in Douglas Flat, Calaveras County, California, and he bought much of his inventory from Levi Strauss, who was a wholesaler as well as a manufacturer of the riveted denim pants he had introduced in 1873. But in late 1884 Gagliardo went out of business, and he and his family relocated to Los Angeles. In February of 1885 he sent a letter to Levi Strauss, asking him to use his influence to get Gagliardo a clerical job.

Strauss had some friends in the Italian community of San Francisco, and they told him to steer clear of the man, because the request was so odd. Levi wrote to Gagliardo anyway and said he couldn’t get him a job, but he sent along $50, which he hoped would be helpful.

On March 3, Gagliardo wrote to Strauss again and, as reported in the San Francisco Examiner, stated that “…he would give Strauss ten days to amend his reply and get something for him to do, or he would send Strauss to the great beyond.” The more sensational Daily Alta California put it this way: “On the 3d of March Gagliardo sent a threatening letter to Strauss, stating that in ten days from the receipt of it, unless something was done, he would blow his head off.”

Strauss’s friends pleaded with him to go to the police, but he thought the man was just “overexcited by his troubles.” On March 11, Strauss heard that Gagliardo had come to San Francisco, so he gave in and told the police, who arrested the distraught man, setting bail at $5,000 (which is about $150,000 today).

He went on trial April 1, but the case was dismissed: Strauss refused to prosecute because Gagliardo said he would “…refrain from carrying his sanguinary promises into execution.”

Gagliardo wasn't the only one of Levi Strauss's customers who should have been in jail. In 1881 a wholesale client came to San Francisco, bought a bunch of dry goods from the firm, and then skipped without paying. His name was Joseph Goldwater.

He and his brother Michael had come to the U.S. from Russia, via England, and changed their name from Goldwasser. They settled into storekeeping in Arizona in the 1870s, and Joseph's job was to place orders with the big wholesalers. In February of 1881 he visited the many merchants in San Francisco's financial district and then....disappeared. As the February 6 issue of The Citizen reported, the businessmen on Sansome, Battery, and Front Streets "...are just now wonderfully anxious to see Joseph Goldwater, a commission merchant engaged in the purchase of goods for Arizona, who left very suddenly for the land of the rattlesnake and tarantula a week ago." 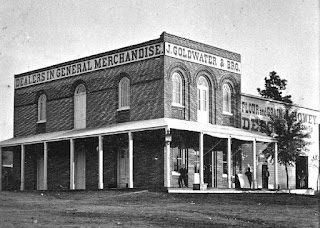 Goldwater had taken the goods and turned them over to a partner in Yuma, with no intention of paying. So the San Francisco merchants informed the U.S. marshal, who went to Arizona to either get the goods back or arrest the culprits. Both Goldwater and his partner were holed up in a store and, as the Sacramento Daily Record-Union reported, "The defendants have men barricaded on the premises, armed with shotguns, who declared that they would resist service at all hazards." The marshal said that he would "serve the process regardless of consequences. If resistance is offered by the mob there will surely be bloodshed. The posse are all determined men."

Well, it didn't end that dramatically. Goldwater gave up, was arrested, and then taken back to San Francisco where he settled his accounts with the merchants.

The Goldwaters continued to do business in Arizona and they became prominent citizens over the succeeding decades. Joseph's great-nephew became a U.S. senator and, in 1964, candidate for President. And you've figured out by now what his name was: Barry Goldwater.

For a deeper look at Levi Strauss's life, check out my 2016 book, Levi Strauss: The Man Who Gave Blue Jeans to the World.