Peter Brandvold, this month's interviewee is the Western Fictioneers Lifetime Achievement Award winner for 2020. Thank you to Peter for taking the time to share his insights into writing and his writer's life.

*  When did you realize you wanted to be a writer?

You know, I can’t remember NOT wanting to be a writer, so I’d have to say very early on. Maybe when I was six and just starting school and I learned there was such a thing.

*  Did you chose the genre you write in or did it choose you?

I would say it chose me. I’d gone to undergrad and grad school wanting to be the next Ernest Hemingway, but I wasn’t having any fun. So after I got out of school and still wasn’t having any fun writing the “literary” stuff, I asked myself what I’d really LIKE to write. That turned out to be westerns because I’d grown up on them. They were the first books I fell in love with.

*  What was the nudge that gave you faith that you could and wanted to be published?

I was extremely naïve. After I had the desire to be a writer it never really occurred to me that I couldn’t be a writer. I was very obsessed, and sometimes obsession is what it takes. Obsession and stubbornness. I was very stubborn. I wasn’t NOT going to be a writer.

*  Do your life experiences influence or hinder your writing?

I think they always influence it, definitely. Even the bad stuff.

*  Where did you get the idea for your latest release and tell a bit about the story?

I can’t say much about my latest releases—I’ve had three books come out in July alone—but they’re all pseudonymous books and I’m not at liberty to divulge their titles. Let’s call my latest release REDEMPTION TRAIL published by Wolfpack. It’s a Yakima Henry yarn. I have no idea where the idea for it came from. Sometimes I just come up with an opening scene and a character or two and put them into play and simply write to discover what happens. As I remember, that’s what happened with REDEMPTION TRAIL. Most of my books come about that way.

*  Are you a plotter or a pantser?

*  Is there a writing routine you follow or do you write when the muse strikes?

* If you had a choice, which is your favorite to write, short stories, novellas, or full-length novels?

Full-length novels. I need room for my imagination to breathe and wander. 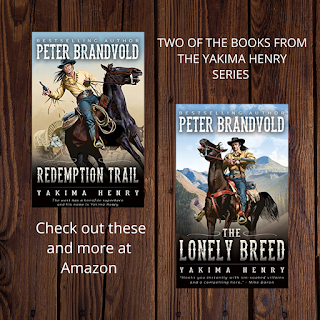 * Do you ‘interview’ your characters before or at any time while telling their story and what do you do if they don’t cooperate with your story idea?

No, I don’t do any of that stuff. Sometimes I actually like it when they don’t cooperate with the story. Sometimes that makes the story more interesting. A nice surprise. Otherwise, if I get off on the wrong track, I backtrack and force them onto the right trail. But that rarely happens. Sometimes you just have to have confidence that what you're writing is good and to just keep going and entertain yourself. That’s the best trick for entertaining the reader that I know. Entertain yourself first.

*  Is there a process where you find your next story or does the idea just hit you?

Usually just hits when I’m out walking with my dog. I have a vivid imagination, and I can just start the camera rolling and images start appearing on the screen. It’s weird but it works.

*  Is there anything else you feel people would like to know or would be surprised to learn about you?

I make beer and wine.

* Do you write in other genres?

I’ve written two “weird” westerns, sci-fi westerns, or fantasy westerns. CANYON OF A THOUSAND EYES and DUST OF THE DAMNED.

*  What are your favorite areas of research and why they are important to you?

Reading nonfiction books about the West. I’ve read a ton of them including the autobiography of John Wesley Hardin, one of my favorites. I also like to travel out west, camp in the mountains, and visit out-of-the-way museums. I once spent three summers in the Sawatch Mountains of Colorado and three winters in the Arizona desert, boondocking in my fifth wheel. Great way to soak up the Old West atmosphere.

*   When do you start to ‘market’ your new released?

The publishers usually do that for me, thank God. I’m not much of a marketer.

Only do it if you can’t NOT do it. That’s what I did, but I came by it naturally. And I really think that’s the only way to do it. Because it’s a damn tough business and your chances of succeeding—well, let’s just say you probably have a better chance of getting hit by lightning in your basement in January than making a living as a writer.

*  Are there authors you grew up with or inspired you to take pen to paper?

There are so many, I hesitate to name any. Certainly Jack London. He was probably the biggest for me and still really is.

*  If it were possible would you choose to go forward in time or back?

Nah, I like it right here. As long as I’m making up stories and telling big lies just as I did uncontrollably as a little kid—who had an imaginary friend named “Cousin”—I’m doing just fine.

For more about Peter and his books: