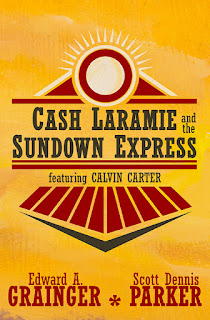 When you think of what makes a western a western, railroads and trains naturally make it onto the Top 10 list. They may not be in the Top 5, but they certainly play a significant role. I know they did when it came time for me to write my own western stories, especially with the creation of Calvin Carter, Railroad Detective. You see? It's right there in his title.

David Cranmer (aka Edward A. Grainger) and I emerged on the scene more or less at the same time, now over a decade ago. We each ended up creating a western hero. He created Cash Laramie, the Outlaw Marshal, who, along with his partner, Gideon Miles, deal with outlaws and desperadoes wherever they rear their ugly heads. For me, I spawned Calvin Carter, a former actor who, in the course of tracking down the man who killed Carter's father, learned he had a knack for detecting. He often dons disguises and uses his acting abilities to bring a certain amount of flair to the role of his lifetime.

A while back, David suggested we team up our heroes and, after a decade of stops and starts, the first pairing of Cash and Carter will be published this fall. In Cash Laramie and the Sundown Express, owlhoots have hijacked the inaugural run of the fastest train in the west, and it's up to Cash and Miles to retake the train. Unbeknownst to them, Carter is on board, in disguise, as he, too, attempts to thwart the hijackers while saving the passengers, including the renowned actress Lillie Langtry.

David thought it a fun idea if I made a list of favorite trains in movies and TV. I agreed, but then quickly realized something. Not only did my list almost instantly get filled with non-western ideas, but some of the more well known westerns to feature trains were movies or TV shows with which I am not familiar. Thus, you won't find Hell on Wheels on this list because I simply haven't watched it. And while I have watched both versions of 3:10 to Yuma, I can't speak with any authority because I can't remember a lot of the plot.

So, with these caveats in mind, here's my list. 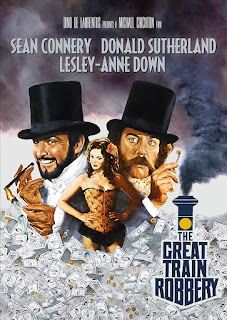 If I'm being honest, this might be the first heist film I ever saw. From the opening of Sean Connery's voiceover explaining how the gold is transported and secured, you sit on the edge of your seat wondering if he and his team will pull off the robbery from a moving train.

Many of the scenes I first saw in my youth remained with me, but two always rose to the top. The ending, when Connery's Pierce, escapes on the police carriage as he was destined for jail, smiling all the way, his arms extended in a sort of bow, really stuck with me. Only now that I think of it do I think a part of Carter's DNA must have emerged from Connery's performance.

The other scene that has always stuck with me is Donald Sutherland's Agar as he runs into the train office and makes wax impressions of the keys, all within 75 seconds. I was enthralled by that kind of thinking and ingenuity. I think this film might've set the stage for my continued enjoyment of heist films, and it undoubtedly enamored me with the charming con man. 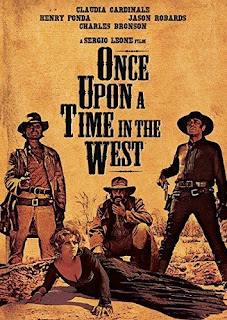 I only saw this film for the first time this century as it is my wife's favorite western. And really, what more is there to say about this Sergio Leone epic that hasn't already been said? Ennio Morricone's score is brilliant, giving the film not only its epic feel but saying, through music, how the modern world is encroaching on the frontier in the form of the railroad.

I appreciate how the locomotive and the building of the railroad serve as the central character in this film, a character that is, in effect, the march of time and we people must adjust to it or get out of the way. And, unlike many westerns that feature railroads, it was a dirty, hot, and mind-numbingly brutal job, but a job that needed to be done, no matter the cost. Of all of Leone's films, this one remains a favorite.

From Russia With Love 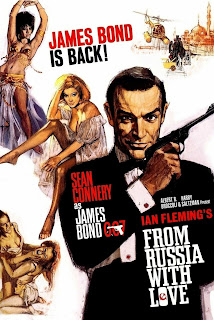 I love James Bond and nearly all of his films, but as I've gotten older, I've become more interested in the movies with smaller stakes. This film, the second in the franchise, has a pretty spectacular train sequence that the historian in me loves.

After Bond and Tatiana Romanova have escaped with the Lektor cryptograph machine, they flee on one of the most famous trains: the Orient Express. In these scenes in the middle of the film, you get to see what it was like to travel in style in what is probably the last major decade where train travel was considered a viable economic means of transportation before planes surpassed it.

Key to my enjoyment of the train sequence is the fight between Bond and Red Grant (Robert Shaw). It is the close confines of a train compartment that give the fight its brutal nature. No gadgets, just fists and brawn and brains. A different Bond (Roger Moore) would again fight in a train (Moonraker), but this Sean Connery version--look at that; two Connery films--is my favorite. 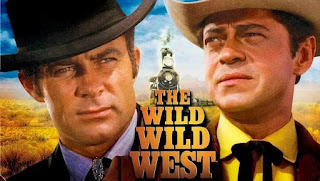 No discussion of westerns and railroads would be complete without a mention of The Wanderer, the train and tricked out rail car of James West and Artemus Gordon. Again, TWWW was my first, favorite western TV show. Being a Star Wars kid, I loved the gadgets, the steampunk-before-steampunk-was-a-thing vibe, and West and Gordon's "home." No matter how many time owlhoots or Dr. Miguelito Loveless boarded the train, you knew there was something the Secret Service agents could do to get themselves out of any predicament.

Not only the gadgets, but I also appreciated how there was science equipment for Gordon to do his investigations and his disguises.

Like the bridge of Star Trek's Enterprise, so many episodes either began or ended on board The Wanderer that it became a crucial component of a wonderfully entertaining TV show.

Back to the Future: Part III 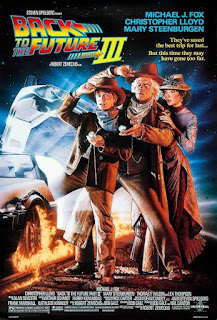 When David asked me the question about railroads in the old west, this is the first one that came to mind.

I consider the first film to be one of those perfect films not only as a time capsule of its time, but the storytelling mechanics within the movie itself. The second one gave us three looks: their future (2015, now our past), an alternate 1985, and a trippy return to the events of the 1955-part of the first film.

But I have a special love for Part III. Set almost entirely in the old west, director Robert Zemeckis basically made a western that held true to all the aspects we have come to love about westerns, but with a twist. Doc Brown not only makes a steam-powered ice machine but he also gets a delightful love story.

Act III's central action sequence is on a train, one they have to get up to 88 MPH as it pushes the futuristic Delorean down the tracks and back to the future. Plus we get a spectacular crash as the locomotive in 1888 falls off the incomplete bridge and crashes into Eastwood Ravine.

As fun as that is, however, it's in the movie's closing moments when we get a truly over-the-top train. Doc Brown, his wife, and two boys (Jules and Verne) return to 1985 to say good-bye to Marty McFly in a *flying train*.

Well, those are my favorite trains in movies and TV. What about yours?

Scott Dennis Parker lives, works, writes, and listens to music way too loud in his native Houston, Texas, with his wife and son. He is the Saturday columnist at DoSomeDamage.com and has a long-running blog at ScottDParker.blogspot.com. Learn about his other books at ScottDennisParker.com.