My 12 Favorite Western Movies - Part One

Admittedly, any list of anyone’s favorite of anything is going to be subjective and this list is no exception. There will be people who will be convinced that I have lost my mind to include a particular movie on this list, and others who are just as convinced of my mental defects because I didn’t include a particular movie. So, right out of the gate, I’m expecting disagreement, controversy, name-calling, and maybe even some shootouts in the street at high noon.

I have included one film which is not technically a Western. Westerns are generally considered as taking place during the last half of the 19th century. This film is loosely based on an incident in the life of someone that took place in 1823. The movie, however, contains elements and themes that are common stock in the Western genre of film and literature. I’ve also included several titles that were each aired as a mini-series, not as individual films, but I saw no reason to discriminate based on length.

So, here you have it. My list of the twelve Western movies that I like the best. I’ve listed them in order from my least favorite to my most favorite. If you have a favorite that you think should be in everyone’s top twelve, but didn’t make the cut in my list, make your case for it in the comments below. 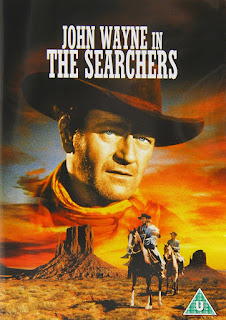 Released in 1956, directed by John Ford, starring John Wayne, Jeffrey Hunter, Ward Bond, Natalie Wood, and Vera Miles. I struggled with where to include this film in the twelve. It could have easily been much closer to the top of the list. This is arguably both John Ford’s best picture and John Wayne’s best performance. Based on the 1954 book of the same name by Alan Le May, the story is based on the true-life account of nine-year-old Cynthia Ann Parker who was abducted from her home on the Texas frontier in 1836 by Comanche Indians.

John Wayne plays anti-hero Ethan Edwards, a bitter Civil War veteran, who returns home to Texas after the war. When his brother’s family is killed or abducted by the Comanche, Ethan sets out on a journey to find the surviving family members and bring them home.

This film was nominated for six awards and won three, including a Golden Globe in 1958. 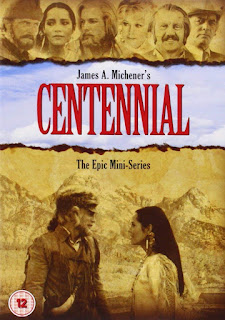 A twelve-part mini-series that aired between October 1, 1978, and February 4, 1979. Based on the 1974 epic novel by James A. Michener, the movie featured a cast of dozens of Hollywood’s biggest stars including Robert Conrad, Barbara Carrera, Richard Chamberlain, Brian Keith, Andy Griffith, Lynn Redgrave, Raymond Burr, and on and on…

The series tells the story of the founding of the American West by looking at the fictional town of Centennial, Colorado, from its settlement in the late 18th century to the present. At the time it was made, it was the longest, the most expensive, and the most complicated film project of its time. It ran for a total of 26 hours, cost 25 million dollars, had a cast of over 100 speaking parts, four directors, five producers, and several hundred extras.

Several of the episodes were nominated for various awards, including two Primetime Emmy Awards and two Golden Globes. 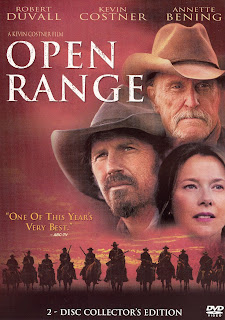 Released in 2003, Produced and directed by Kevin Costner, starring Kevin Costner, Robert Duvall, Annette Benning, and Michael Jeter (who passed away before the movie was released).

Open Range is an old-fashioned Western with cowboys, cattle drives, a ruthless land baron, gunfights in the street, and a love interest for Costner’s character. The plot is simple, the characters are well developed and genuine, and the chemistry between Costner and Duvall is apparent.

The movie is based on the 1990 book, The Open Range Men, by Lauran Paine. Paine was a prolific writer who wrote under numerous pen names, publishing over 1,000 books in different genres. Only two of his books were ever made into movies and both of them were Westerns.

Costner and Duvall play two cattlemen driving a herd across the open range. They stop for supplies in a small Montana town where they discover the local land baron has laid claim to all of the open rangeland and is determined to steal the herd and kill the cattlemen. Costner’s character, Charley Waite is tortured by his past as a Confederate sharpshooter and all of the killings that he had done. He and Boss Spearman (Duvall) are not the kinds to stand by and watch their men and cattle be killed and taken from them.

Although there are some authenticity issues with the film (the magic six-shooter that never has to be reloaded), the inevitable shootout with the bad guys at the end is probably the best in any Western film. Open Range would have made it into my top twelve for the final shootout alone—it’s that good. 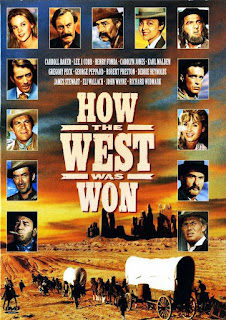 How the West was Won is the story of three generations of the Rawlings/Prescott family as they make their way from New York to California between the years 1839 and 1889. This story of westward expansion includes Indians, river pirates, the civil war, the building of the railroads, outlaws, and lawmen. The cast of stars that were assembled for this film is phenomenal and includes James Stewart, Henry Fonda, John Wayne, Walter Brennan, Gregory Peck, and Debbie Reynolds, to name just a few. The film is also narrated by Spencer Tracy.

The film was directed by three veteran directors, John Ford, Henry Hathaway, and George Marshall. Oddly enough, it was first released in London, in the UK, in November of 1962, and then released in the US in February of 1963. Produced at a budget of fewer than 15 million dollars. It grossed over 50 million at the box office, making it a huge success for MGM, and one of the studio’s last great “epic” films.

The music for the film was composed and conducted by Alfred Newman. The score was nominated for an Academy Award. It lost out but was later selected to fill the #25 spot in the American Film Institute’s “100 Years of Film Scores” list.

How the West Was Won was the winner of ten different awards, including three of the eight Academy Awards that it was nominated for. 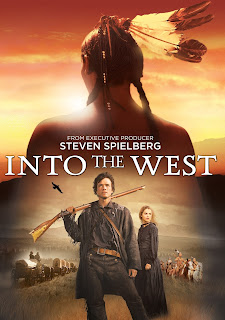 Into the West is a 2005 mini-series composed of six two-hour episodes. It chronicles the westward expansion of the United States, beginning in the early 1820s. It’s told through the eyes of two different families, one white, one native, as the family’s fates become intertwined.

Jacob Wheeler (Matthew Settle) leaves his parent’s home in Virginia and heads west to seek adventure. He is taken under the wing of the legendary mountain man, Jedediah Smith, who teaches him how to survive in the wilderness. Loved by the Buffalo (George Leach) is a Lakota holy man, who’s calling it is to try to understand a prophesy that has his people being wiped out by the encroaching white settlers. Jacob marries Loved by the Buffalo’s sister, Thunder Heart Woman, thus tying the destiny of both families together throughout the rest of the story.

Its scope covers six generations of the two families and depicts both fictionalized and historical events and people.

Into the West has an impressive cast, with over 250 speaking parts. Each of the six episodes had a different director, and the project had eight different producers – most noticeably were Steven Spielberg and Kirk Ellis, who was also one of the writers for the mini-series.

Into the West received 16 Emmy nominations in 2006, picking up two wins. It was also nominated for an award by the Screen Acts Guild. 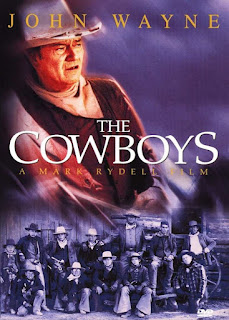 The Cowboys, released in 1972, directed by Mark Rydell, is based on the book by the same name, published in January of 1971 and written by William Dale Jennings, who also wrote “The Ronin.”

This is one of John Wayne’s later films, and also stars Roscoe Lee Browne, Bruce Dern, Colleen Dewhurst, and a handful of young cowboys, notably Robert Carradine and A. Martinez.

The Duke plays an aging cattleman by the name of Will Anderson, who needs to drive a herd of cattle from Butte, Montana to Belle Fourche, South Dakota - four hundred miles away. However, just before the drive begins, his cattle hands get the gold bug and run off to the Montana gold fields leaving him stranded and desperate for help. With no other able-bodied men available to help him move his cattle, he reluctantly enlists the aid of eleven school boys, ages nine to thirteen.

Roscoe Lee Brown does an outstanding job of portraying Jebediah Nightlinger, the camp cook. Probably the best performance by any of the cast comes from Bruce Dern as Asa “Long Hair” Watts, an ex-con who tried signing on as a drover but was turned away by Will Anderson who caught him in a lie. Watts and his gang follow the herd seeking an opportunity to steal it away from the inexperienced cowboys, but the young boys do a lot of growing up throughout the cattle drive, and taking the herd from them is not as easy as Watts and his gang thinks it will be.

The Cowboys was the recipient, in 1972, of the Bronze Wrangler Award (best theatrical motion picture of the year) from the Western Heritage Awards.

(Next month, the top six on my 12 Favorite Western Movies list.) 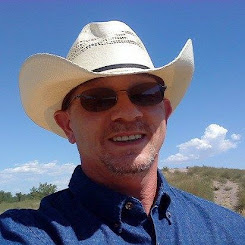