In this post, we celebrate two milestones from 1858 that you may not realize occurred so long ago. Often, we tend to think of the 20th Century as “the modern world” and the 19th Century as “ages ago.” However, many so-called modern inventions actually had their basis in the 1800s or even earlier. Today, we’ll talk about athlete John Holden and scientist (and Catholic priest) George Mary Searle. 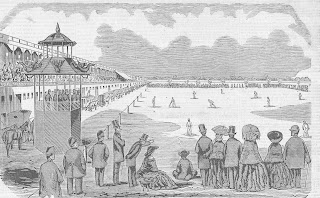 On September 10, 1858, baseball’s first “World Series” was played and John Holden made history. Baseball at that time was a mostly New York sport and nine clubs (four in Brooklyn and five in Manhattan) were deemed “the best.” Because the Brooklyn Atlantics seemed a certain winner, all-star teams were selected instead (they were called “picked nines”). The chosen venue was Neutral Fashion Racecourse in Nassau County, though access from Manhattan wasn’t easy. Baseball fans had to take a small steam ferry from the foot of Fulton Street up the East River to a landing near what is now La Guardia Airport, then take a bumpy train ride to the track. Long Islanders traveled over dirt roads in carriages and omnibuses (some so large they required 10 to 14 horse hitches).

The pricy admission fee—50 cents (at a time when $1.65 a day was the top wage for a skilled workman!—was needed to pay the expense of renting the field and putting in a baseball diamond. The sponsors of the Series also didn’t seem to want or expect large, noisy crowds. They scheduled the games during midweek when most workers would be occupied. Nonetheless, the opening game saw a crowd of over 4,000 well-dressed fans. 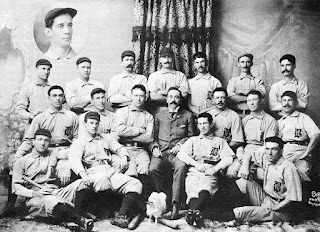 Baseball in 1858 wasn’t the same as today’s baseball. It was more like softball, with a slightly larger ball and underhand pitches. Flyballs caught on the first bounce were “putouts,” not an easy feat with a ball of India rubber. The team lineups represented all the major New York clubs. The New York Nine featured two players each from the Knickerbockers, Eagles, Gothams, and Empires plus one from the Unions, while the Brooklyn team consisted of three Atlantics players, and two players each from Excelsiors, the Eckfords, and the Putnams. Brooklyn was a slight pregame favorite and they did lead 5-1 at the end of two and a half innings. However, New York settled down and began to wear down Brooklyn’s Matty O’Brien. In the eighth inning, trailing 18-17, New York scored five runs to take the lead and win the game 22-18.

John Holden, Brooklyn’s second baseman, hit the world’s first recorded home run, winning $25 for his feat. A wealthy fan of the Eckfords, Holden’s home team, bet $100 that he would “hit one out of the park,” promising Holden a fourth of that as a reward. Holden waited for just the right pitch—waiting out the pitcher was perfectly safe, as balls and strikes weren’t called (although extreme delaying tactics were considered unsportsmanlike)—and hit a line drive to deep rightfield for the homer. This was the only home run of the Series, though. The other games were much more ordinary. 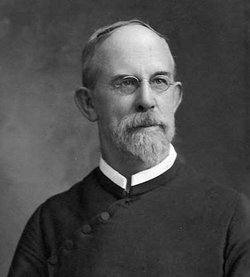 Also on the same date, though obviously not at the same time, astronomer and Catholic priest George Mary Searle discovered asteroid 55 Pandora from the Dudley Observatory near Albany, New York. It was Searle’s first and only asteroid discovery, although he did discover six galaxies. The asteroid is named after the woman of Greek myth who unwisely opened the box that allowed evil into the world. Apparently, the name itself was chosen by Blandina Dudley, widow of the observatory’s founder. The asteroid shares its name with one of Saturn’s moons.

55 Pandora orbits the sun with a period of 4.58 Earth years, with an orbital plane that lies at angle of 7.2 degrees to the plane of the elliptic. It has a cross-sectional size of 66.7 kilometers, so it’s a pretty large asteroid. It’s also pretty bright, so it’s easily spotted with a good telescope. The asteroid belt lies between the orbits of Mars and Jupiter. Its total mass is about 4% that of our moon and half of that is taken up by its four largest asteroids: Ceres, Vesta, Pallas, and Hygiea. Within this belt lie perhaps millions of solid, irregularly shaped bodies.

For about 200 years, scientists believed there must be a planet in between Mars and Jupiter. It wasn’t until the 1800s that William Hershal coined the term “asteroids” after the Greek term for star-like (because no matter how powerful their telescopes, the asteroids never resolved into discs like the planets did). By 1807, four asteroids had been discovered, but it wasn’t until the 1850s that science understood there was a “belt” of the bodies out there. By mid-1868, 100 asteroids had been discovered, including 55 Pandora.

The original theory of the formation of the asteroid belt was that a large planet had somehow broken apart into the individual bodies we have today. More recently, it is hypothesized that instead, the asteroids come from the remains of several planets which were unable to fully form due to Jupiter’s gravitational influence. There are three basic groups of asteroids: those with carbonaceous material (C-Type), those made of silicates (S-Type), and those rich in metal ores (M-Type).

Did you realize that baseball’s first World Series occurred during the era of the cowboy? And what about those asteroids—isn’t it amazing that they had already found so many before the 20th Century? Your characters could follow John Holden’s athletic career, along with his fellow baseball team members, or they could have a more scientific bend and wonder about the origins of the asteroids.