Work in the Frontier Army

From Class and Race in the Frontier Army, by Kevin Adams

The Civil War jumble society more than perhaps we are willing to admit. A new order arose, it seems, and work lost its “moral” value. Oh yes, lip service was paid to the “dignity and nobility of work” but, says Adams, it grew more and more painful to look closely at labor itself.

In the U.S. Army, institutions harkened back to the 18th century. It’s aristocratic ethos created a labor system that divided officers from enlisted men. One indication is the fact that officers’ written words were frequently in the passive voice. Says Adams, “The use of the passive voice to describe physical labor powerfully demonstrates frontier officers’ attitudes about work, as class politics suffused their language, even at the level of verb and subject choice. . . scholars have unwittingly extended the lifespan of officers’ attitudes toward enlisted men and, by extension, the Victorian classism that fueled them.

I do love so much to be waited on you know. –New army bride, Jennie Barniz, to her parents

Homework has nothing to do with schools

In the days before washing machines and gas ranges, keeping house required cooking, cleaning, and detailed work usually done by women. For most American males of the time, American culture and political ideology said this is how it should be. The domestic sphere was woman’s work.

Immediately after the Civil War, Army regulations allowed officers and their families to use “servant soldiers.” These “strikers” and “dog-robbers” were paid extra for the extra work. The practice was banned by Congress in 1870, but officers and their wives, desperate for domestic help, meant that enlisted soldiers were still assigned to these duties. In Adams’ words, “. . . even as officers preached the imperative of absolute obedience, some were subverting the will of Congress.”

Officers believed that their standing and lifestyle made servants indispensible, Adams writes. He quotes Elizabeth Custer as saying, “Nothing seemed to annoy my husband more than to find me in the kitchen.”

Still, civilians began to fill the ranks of officers servants. Mostly they were mentioned only by the job they did. My black boy has also caught several messes of delicious fish, for example. Adams writes: Reconstruction duty allowed officers to bring southern blacks seeking greater opportunities to the frontier to work as servants, thus fusing racialist thinking with economic opportunity.

Blacks were not the only nonwhite groups employed. In California, “digger Indians” were often hired. Whites put them at the bottom of the labor market. One wife hired “an old Indian buy the name of Tom” for board and old clothes because “that’s all a Digger Indian’s labor is worth. . . . They don’t know much, though they look very sober and knowing sometimes.”

Army posts all had Chinese servants, too, at least the western ones did. And in the southwest, the servants tended to be Mexican, as the border meant little. Elizabeth Custer referred to the Mexican wife of a 7th Cavalry soldier  as a member of “that hairy race” and thought she was savage looking.

The Chinese were considered “devoted,” but also “queer. Most Americans thought they belonged to an “inferior, corrupt, and decaying civilization.” They were mistreated inside and outside the army. Martha Summerhayes wrote, “I secured a Chinaman of good caste for a servant, and by deceiving him (also my aunt’s advice) with the idea we were going only as far as Sacramento, succeeded in making him willing to accompany us.”

Adams’ conclusion is thus: “The one place where whiteness truly mattered, it turns out, was in relation to nonwhites.” He continues to speak of the “laborer” enlisted men. “White enlisted men may have been subordinate to officers . . . they enjoyed the privileges that white skin bestowed on Euro-Americans.”

The army tried to get the so-called Striker Law repealed in 1881, eleven years after it was passed. Adams quotes General William T. Sherman’s argument for its appeal: “I honor labor as much as any man, and never was ashamed to cook my own meal or saddle my own horse, but no officer can habitually do this work and properly supervise his command and company.” The author says, “Officers expected and felt that they deserved both high military rank and social esteem. . . . In short, officers understood themselves and their surroundings in terms of class, a worldview strengthened by nineteenth-century military culture. The patronizing, condescending, and cruel potential of such bias was sometimes expressed when officers interacted closely with working enlisted men.”

For nearly a hundred years, Americans had been suspicious of a standing army, and they held a negative view of men who volunteered in time of peace. Adams quotes a New York newspaper: “The Regular Army is composed of bummers, loafers, and foreign paupers.” Indeed, the United States soldier was looked upon as an idler—too lazy to work. In other words, the frontier army transformed enlisted men into poorly paid laborers, something that ordinary soldiers recognized and castigated. No wonder nearly one-third of army enlistees deserted.

Perhaps the most surprising thing to me (Charlie Whipple) was the fact that “fatique duty” seemed more important that soldierly training. In 1868, the surgeon at Fort Laramie recorded in his diary, “There has been no drill this month.” So what were they doing? Cutting wood, running the sawmill, and burning lime and charcoal. In addition, some 50 men were detailed for duty with the Quartermaster as teamsters, carpenters, blacksmiths, masons, laborers, and clerks. . . . Sunday eventually became the preferred day for drills.

Adams continues: Not even troops stationed on the front lines along the Bozeman Trail in 1866-7 received rudimentary training. . . . Cavalry captain Albert Barnitz bluntly put it in a letter to his wife from the field, “our men are in the main a set of uninstructed recruits who can’t hit a barn door at 300 yards, with a carbine, and much less an Indian.”

Barnitz was with Custer’s 7th at Washita.

Next month, we’ll have a look at Work and Leisure Culture 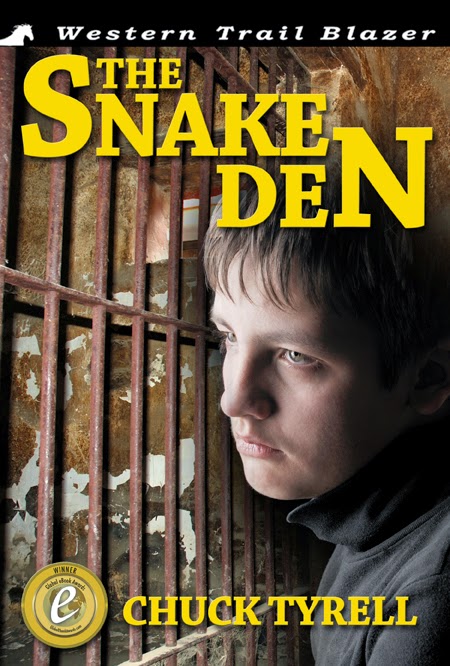 Thousands have now read The Snake Den. Have you?

Posted by ChuckTyrell at 7:27 AM