The Bill & Bill Show with a Heck of an Ending

A man once said to me, "Destiny ain't about chance, son; it's about choice."

He'd spoken that jewel after I'd made a particularly stupid mistake in my young life. At the time I had to think on that one for a spell, but my long and winding journey since has taught me it's true enough for the most part.

You take, for example the outlaw Bill Doolin. Doolin made a long string of bad choices to complete his destiny, but in December of 1895 if he hadn't decided to visit a particular spa for a hot mineral bath in Eureka Springs, Arkansas, maybe he wouldn't have been gunned down near Lawton, Indian Territory in August, 1896.

In the spring of 1895 Doolin and his gang had robbed a train cutting through the I.T. and had gotten away with a $50,000 army payroll. Rumor had it that Bill had in mind to retire after that big haul to spend more time with his young wife and son. But first he wanted to take a sojourn to the reputed Eureka Springs therapeutic baths to soothe some residual aches and pains from old gunshot wounds he'd collected over the years.

Another man of destiny, Deputy U.S. Marshal Bill Tilghman, had been in pursuit of Doolin for some time, and getting wind of the outlaw gone off to Eureka, followed up on the lead. But no sense traveling all that way, Tilghman must've thought, without partaking in one of the famous hot baths himself, so that's what he decided to do, Bill Doolin could wait. When he entered the bathhouse he was surprised to see Doolin in another room sitting on a couch reading a newspaper. Well, no time like the present.


The lawman pulled his Peacemaker and approached Doolin rapidly, pointing the revolver at the reclining outlaw's ear. "Bill Doolin," Tilghman announced. "You're under arrest." 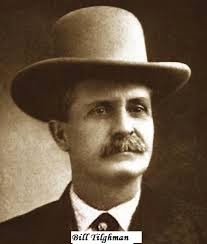 Startled, the outlaw started for his own gun under his coat, but Tilghman grabbed Doolin's sleeve pulling it tight and preventing the fugitive from unbuttoning his coat to get to his gun. Tilghman held him there and Doolin continued to resist until the marshal allowed as how he'd go ahead and blow Bill's brains out if he didn't give it up. Doolin complied.

Tilghman telegraphed back to the Oklahoma Territory capital of Guthrie that he'd captured Bill Doolin and was bringing him in. Heck Thomas and several other deputy marshals met Tilghman and his prisoner at the Guthrie train station. Word had gotten out about Doolin's capture, so a crowd of about 2,000 crowded around the depot and along the streets to get a glimpse of the renowned outlaw. Many citizens stopped by the marshal's office that afternoon to meet Doolin and congratulate Tilghman.

Nobody ever figured the notorious Bill Doolin would ever be brought in alive, but if anybody could it'd be one of the three "Oklahoma Guardsmen" as the deputies were known--Tilghman, Chris Madsen, and Heck Thomas. Later that same evening Doolin was taken to the finest restaurant and hotel in Guthrie for dinner then returned to his jail cell.

During the months' long stay in the Guthrie jail awaiting trial, Doolin's celebrity status wore off, as did the outlaw's patience with being locked up. In June of 1896 an old gang mate of his, "Dynamite Dick" Clifton, was brought in and became Doolin's cellmate. The two started hatching a plan for an escape, and in July Bill feigned an illness and when he got to the infirmary, stripped the guard of his firearm, broke out his pard Dynamite Dick along with seven other inmates, and took off.

The jailbreak had occurred on Deputy Thomas' watch, which he apparently took personal, making it his mission to haul Doolin back to the Territory capital jail dead or alive.


By late August word came around that Doolin was spotted in the vicinity of his father-in-law's store in Lawton down near Ft. Sill. Thomas formed a posse and lit a shuck southward.

On the evening of August 24th, some young boys who knew Doolin told him they'd come across a group of lawmen camping outside of town, and one of them was asking if they knew the whereabouts of Bill. Around midnight Doolin saddled his horse and made provisions for a long ride. He led his horse down a quiet moonlit lane wary and jumpy at every shadow. He'd armed himself with two pistols; he carried a Winchester.

Deputy Heck Thomas stood behind a tree in the dark shadows at the edge of the lane, holding a 10-gauge coach gun, awaiting Doolin's approach. His men were spread out on both sides.

Another deputy across the road shouted, "Put your hands up, you're surrounded."

Doolin fired his rifle wildly in Thomas' direction then drew a pistol aiming toward the other voice. But before he could get off that second shot, Thomas let loose with the shotgun, the double aught slugs striking Doolin in the chest. A fusillade from the possemen followed, but Heck Thomas' buckshot had been sufficient. The bullet-riddled body of the outlaw Bill Doolin lay dead in the moonlight, the last choice made to reach his destiny.

Phil Truman is the author of the award-winning historical western novel,  Red Lands Outlaw, the Ballad of Henry Starr;  a sports inspirational about small town schoolboy football entitled GAME, an American Novel; and Treasure Kills (formerly Legends of Tsalagee), a mystery/adventure in a small town.

He's currently working on a series of western shorts put together in a volume called West of the Dead Line, the first five stories of which are available on Amazon in e-format only for 99 cents each. Volume I - eight stories in all - will be available in electronic format in the Fall of 2014.