The Story Behind Six-Gun Salad 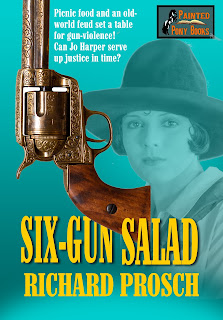 From an everyday greeting as people pass each other on the street, to organized community efforts, small town America often overflows with an abundance of kindness and generosity. But like anywhere else, it can be rife with contention, often hidden, often held tight just below the surface until one wrong word or action sets off a powder keg of enmity.

When guns are involved, bad feelings can turn deadly in the space of a heartbeat.

You don't have to follow the news closely to know there's been a lot of media coverage about racial tension.

Students of history know this is nothing new.

The countries of origin may change, but even in the old west, old-country grudges kept new generations at each others' throats.

All of these thoughts came together writing my new Jo Harper story, SIX-GUN SALAD from Painted Pony Books. Community picnics, but arguments in the street. Individuals working to get along while others held to old their old cultural bias.

It all got tossed together in the bowl and served up as danger for Jo, Frog and Abby, and hopefully, a reminder of the best and worst of our natures --qualities that often aren't what they might first seem to be.

Working through the contradictions is important for young and old alike. Another reason I like to think of these stories as good for all ages.

Would you cry over spilled potato salad? Would you risk your life for it? Jo Harper can't contain her frustration when a determined Danish lawyer and a hard-headed German farmer get ready to square off with guns over just that.

It's an Elizabethan tragedy-in-the-making unless Jo, Frog and Abby can unravel the threads of a dangerous plot that threatens to tear apart not just two families, but the entire town of Willowby, Wyoming.

Excerpt
"Karl! Karl, that's enough."
To his credit, Svensen listened to his wife and backed away from Schultz. But not before delivering another rotten threat.
"Stay away from us, Kraut. Stay away from my family, away from my house and business. We don't need your kind."
But Schultz wasn't having it.
He stood up with a clumsy stagger and, brushing himself off, delivered a counter-threat.
"You are all mouth and all knuckles because you are bigger than me. But how are you with a gun, counselor? Let me get my gun and we'll see who is better."
Jo thought she saw where Mr. Schultz was going, and though she was an innocent bystander, she was also Abby Drake's deputy constable. She ran between the men.
"Go home, Mr. Schultz. Go home, before you say something you'll regret."
"Stay out of this, Jo," said Svensen, reaching out to brush her aside.
Jo sidestepped the lawyer's reach and again tried to appeal to Schultz.
"Think of your family, sir. Think about Buster. You don't want to do this."
For the first time that night, Schultz seemed to see Jo, really see her, and the look in his eyes didn't belong to a bleary-headed drunk, but to a hurt man hoping to regain his pride.
"I have to, Jo. Sometimes, a man has to do these things."
Jo let Schultz gently push her aside. He stood tall and, in front of her and Mrs. Svensen, said, "Tuesday morning. Seven o-clock in front of the Filter Building. Find a weapon, you scurvy Dane. Find a weapon and prepare to pay the price for your insults."
It wasn't going to be such a quiet week, after all.
Schultz had just challenged the lawyer to a gunfight!


Leave a comment for a chance at a free copy of Richard Prosch's Six-Gun Salad.

Meanwhile, the first book in the Jo Harper series, WAITING FOR A COMET, is free for Kindle until August 14.


After growing up on a Nebraska farm, Richard Prosch worked as a professional writer, artist, and teacher in Wyoming, South Carolina, and Missouri. His western crime fiction captures the fleeting history and lonely frontier stories of his youth where characters aren’t always what they seem, and the windburned landscapes are filled with swift, deadly danger. Read more at www.RichardProsch.com