Whooping it Up: Poker

When a new town popped up in the Old West, recreation was among the first of the services offered. And that recreation typically involved the "Three W's" -- whiskey, whoring and wagering. We've already dealt with the first two subjects, so let's talk about some of the many ways a cowboy could be parted from his money in a gambling hall. 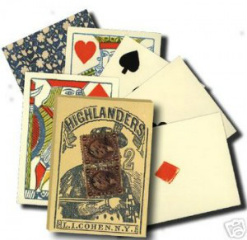 The game we know today as poker got its American start in New Orleans. In the early 1800's, French settlers played a card game that involved bluffing and betting, called Poque. From there, the game spread to the Western frontier via riverboats, on which gambling was a common pastime. The exact origins of the game are unknown. Poker may have evolved from a 16th Century Persian game called As Nas, which was played with a 25 card deck containing five suits, with rules similar to today's five card stud. However, the game may also have been invented by the Chinese in 900 A.D. An early form of the game, called Brag, was played with three cards per player, and involved a lot of bluffing.

In 1829, Poker was played with a deck made up of just 20 cards: Ace, King, Queen, Jack and 10 of each of the four suits. Each game had only four players, who were dealt a hand made up of five cards. There was no draw in the original game: you played the original hand you were dealt.

Poker hand rankings were different in the Old West, too, with combinations called things like “full” and “triplets.” These were similar to today’s full house and three-of-a-kind, respectively. Because of the cards involved in the game, the only straight flush in the game was a Royal Flush. The lack of cards below 10 made straight flush hands irrelevant, and this hand ranking was only added after the expansion to a 52-card deck.

During the California Gold Rush of 1849, San Francisco replaced New Orleans as the gambling center of the United States. Around this time, the 52-card deck had been adopted for poker, along with new rules that included draw poker and the flush. The straight was not added to the game until after the Civil War, and a non-drawing, "stud" version of the game was introduced. The first "wild card" poker was seen around 1875. 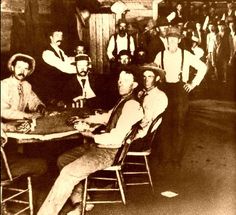 The type of poker game most typically played west of the Mississippi would have been "Jackpots," an old-fashioned term that referred to what is now called Five-Card Draw, Jacks or Better." It was this game that Doc Holliday and Wild Bill Hickock played, and which replaced faro as the card game of the Wild West.

Ante: a small bet each player is required to make in order to stay in the game
Bluff: to attempt to mislead other players about the strength of your hand, especially if you are trying to convince them that you have a better hand than you actually do
Call: to contribute the minimum amount of money to the pot that is needed to continue playing a hand; this depends on the amount bet by the initial player
Check: to pass on a bet until the other players have gone; at the end of the round, you must either call, raise or fold
Dealer: the person who shuffles the deck and passes out the cards
Draw Poker: a variation of the game in which players are dealt a complete hand at the beginning of the game, and then given the opportunity to replace some of the cards with a second deal in an attempt to improve their hand
Flush: a hand consisting of five cards of the same suit
Fold: to withdraw from the game, giving up whatever you may have bet so far; the signal is to place your cards face-down onto the table. You only fold when there is no chance that your hand could win
Four of a Kind: a hand containing all four cards of the same rank, such as four jacks
Full House: a hand containing three of one type of card and two of another
Hand: the cards dealt to each player
Hole Cards: in stud poker, the cards dealt face-down
Pair: two cards of the same rank
Pot: the money bet by players, traditionally piled in the center of the table
Raise: to bet more than the minimum required to call, forcing other players to put in the difference between their bet and the new bet in order to remain in the game
Ranking: From highest value to lowest value, the possible hands are
Royal Flush: Ace, King, Queen, Jack and Ten of one suit; the highest possible hand in standard poker
Show-down: if more than one player remains in the game until after the final betting round, players must turn their cards face-up to determine which hand is the winner
Straight: a hand with cards in numerical order, but not of the same suit
Straight Flush: a hand with cards in numerical order and of the same suit
Stud Poker: a variation of the game in which some cards are dealt face up and some are face down, with several betting intervals in one game.
Suit: one of four categories that the cards are divided into; consists of spades and clubs (black cards) and hearts and diamonds (red cards); each suit contains cards numbered 1-10, along with a jack, queen, king and ace.
Three of a Kind: a hand containing three cards of the same rank
Wild Card: at the beginning of the deal, one card rank may be announced to be "wild," meaning that cards of that rank may be declared by their holder to be any other rank needed to complete their hand. 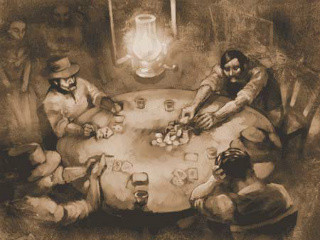