SOMETHING TO EASE YOUR PAIN? - Tom Rizzo


A man who dubbed himself “The Rattlesnake King” stood before a crowd in colorful western attire in the 1890s killing dozens of rattlesnakes, telling onlookers he needed the venom to process his all-purpose-cure: Clark Stanley’s Snake Oil Liniment. 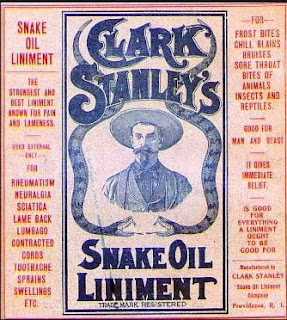 Earlier this year, I published a blog post about Clark Stanley’s exploiting the so-called curative powers of snake oil, powers he learned from a Hopi medicine man --at least according to a pamphlet he wrote.

Stanley ranks among the top ten peddlers of wacky cures for a gullible public.

A number of American fraudsters - labeled snake oil salesmen - traveled across the frontier from town-to-town extolling the healing powers of snake oil and other elixirs.

The boasted their products would ease pain from rheumatism, aching muscles, joints, inflammation, high blood pressure, cholesterol, and anything else that ails you, even deafness. 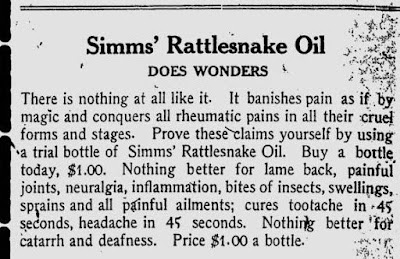 Obviously, these products couldn’t possibly work as advertised—or there wouldn’t be any need for physicians (such as Western Fictioneers Vice-President Dr. Keith Souter).


The sales of these magical compounds were fueled by an impressionable and unsuspecting public. In some cases, entire families got into the act. For example, Barnum & Bailey Circus promoted a sideshow called the Seven Sutherland Sisters in 1884. 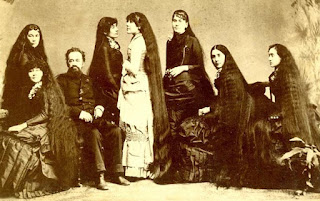 This act featured sisters ranging in age from 18 to 36 who sang a variety of songs.

Their harmony, while good, took a back seat to their hair.

At the end of their performances, the sisters would turn in unison, lettering their combined 36 and 1/2 feet of thick hair cascade down the backs of their white gowns into the orchestra pit—followed by thunderous applause.

P.T. Barnum of the Greatest Show on Earth, referred to them as the “seven most pleasing wonders of the world.”

The Rev. Fletcher Sutherland, the girls’ father, shrewdly created and patented a hair-growing tonic. Since a lot of Victorian women craved the same kind of hair, sales went through the roof. According to Lisa Hix, in an article for Collectors Weekly, the popularity of these hair-care products came “at a time when disease and bad medicine caused men and women’s hair to fall out…” 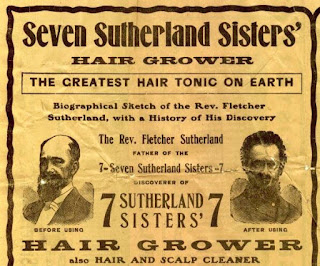 A shrewd marketing scheme aimed at promoting the line of products as a miracle cure for balding made the family millions. The sisters’ popularity skyrocketed to a point where they dominated the front page of newspapers—until their tragic end later in life.

In 1905, Collier's magazine featured an expose of these quacks and their lucrative cures.

“Gullible America will spend … millions of dollars in the purchase of patent medicines … huge quantities of alcohol, an appalling amount of opiates and narcotics, a wide assortment of varies drugs ranges from powerful an dangerous heart depressants to insidious liver stimulants; and, far in excess of all other ingredients, undiluted fraud.” 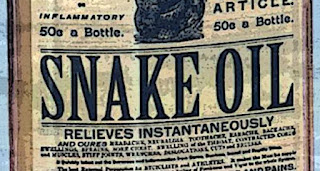 This collective term applied to any shyster who peddled miracle cures to the public.

Characters of the same ilk were so fascinating, they were written into scripts for American westerns. 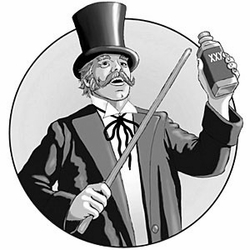 Playwright Eugene O'Neill, about thirty years later, according to NPR, referred to snake oil in his 1956 play The Iceman Cometh, when a character suggested a rival was "standing on a street corner in hell right now, making suckers of the damned, telling them there's nothing like snake oil for a bad burn."

In 1917, a federal government sized a shipment of Stanley’s Snake Oil Liniment and found its  “pain destroying compounds” consisted mineral oil—containing about one percent of fatty oil—camphor and turpentine—probably to impart a medicinal smell—and red pepper, to make the liquid feel warm and soothing to the skin.


In reality, most products didn't contain much snake oil. And, the ones that did used the wrong snake oil.


The origin of snake oil containing healing power started in the 19th century when Chinese immigrants came to this country to help build the Transcontinental Railroad. At the end of grueling days working with hammers and pickaxes, and crowbars, these immigrants would apply a liquid compound they brought with them to help sooth sore muscles and aching joints. 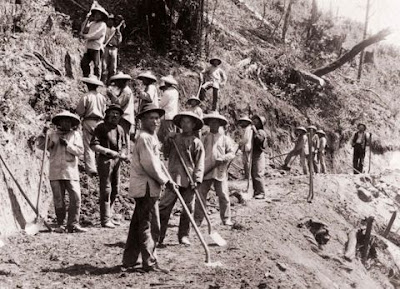 The key component in the curative liquid was snake oil. When Americans learned how well the treatment worked, snake oil began being touted as an all-purpose remedy for most of everything.

Dozens of rattlesnake farms were started. In 1885, rattlesnake oil sold for $4 an ounce. In 1891, the Wheeling (West Virginia) Register reported rattlesnakes went for $25 to $50 each—as long as they were four-feet or longer.

The products that actually contained authentic rattlesnake oil (most did not) weren't as effective as Chinese workers’ oil. But there was a good reason.


The problem: American snake oil salesmen did not use the right snake. 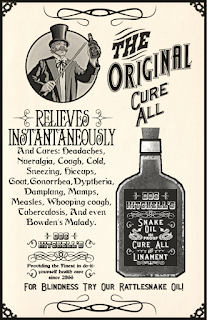 Oil from Chinese water snakes proved particularly useful in fighting inflammation and other health issues because the oil was "rich in the omega-3 acids that help reduce inflammation."

Public furor over useless, fraudulent, and sometimes dangerous elixirs led to passage of the Pure Food and Drugs Act in 1906.

The feds flexed their regulatory muscle against Clark Stanley for violating the food and drug act.

Charged with “misbranding” and “falsely and fraudulently” misrepresenting his product “as a remedy for all pain,” Stanley was fined $20 (about $429 in today’s dollars).

Stanley elected not to dispute the charge and paid the pittance of the fine gladly—probably with a sigh of relief.


For more true tales about the characters and events of the fascinating American West visit Tom's StoryTeller Blog.

Posted by thomasrizzo at 3:00 AM