This is Part 1 of a series on everybody's favorite character: the cowboy.

The myth of the cowboy dates back to Colonial America. In western Massachusetts, the uplands of the Carolinas, in Florida and in the red clay hills of Georgia and Alabama, cattle-raising societies existed before the Great Plains had been cleared of buffalo. Much of the protocol of cattle branding actually evolved in Florida.  And yet, the cattlemen of the Southeast never became the national heroes that their Western counterparts did. They remained illiterate, and un-mounted, drifting from one grazing ground to another and trailing their herds to market in Savannah or Jacksonville, or to the Ohio River towns. 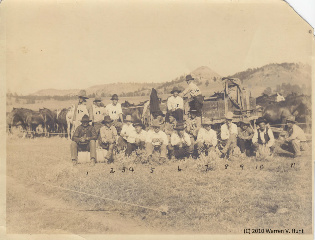 In the West, the Spanish imported cattle and horses, and ranching had spread into what is now Texas, Arizona and New Mexico by the 1700's. Few markets existed for meat, hides or tallow, and most ranchers shipped these products south to Mexico City. In the early 1800's, American ships began servicing the California ports, providing a ready market for the ranchers. Huge roundups were held to collect cattle, and hard-working vaqueros controlled the herds. Known for their expert riding and roping skills, vaqueros were said to dismount only for a chance to dance with a pretty senorita.

Ranching ceased to be a Spanish profession as more and more Americans flooded the West. Especially after the Mexican-American War, settlers moved into California and intermarried with the Hispanic ranchers, adopting their ranching style. As the livestock industry expanded, these horsemen found work in Oregon, Idaho, Nevada, Arizona -- and even Hawaii. Many of these cowboys retained strongly Hispanic styles ("buckaroo" comes directly from "vaquero").

The cowboy we know today had his roots in Texas. There, cattle grew wild and had few natural enemies. By the end of the Civil War, there were an estimated five million wild cattle in the territory. It was at this time that the Golden Age of the cowboy began. The era of the open range and the great cattle drives lasted from 1866 to 1886, and was ignited by the high price of beef in the North. Union armies had exhausted the supply there, and the urbanizing East provided a ready beef market. A steer worth four dollars in Texas might be sold for forty dollars in the North. 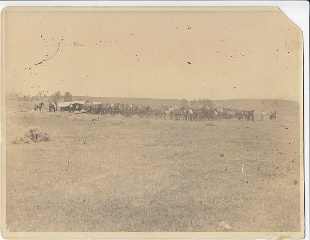 Beginning in 1866, Texans began moving long lines of longhorns northwards to market, using the techniques of the vaqueros. The primary railhead at that time was Sedalia, Missouri. Indian tribes protested the passage of the cattle, as did farmers who resented the animals trampling their crops and spreading the dreaded Texas fever. Outlaws made off with the cattle -- and were not averse to murdering the men driving them.

The Texans desperately searched for a route with better grass and fewer Indians, farmers and desperadoes. As the railroad inched across the plains, new trails -- among them the Chisholm, Western and Loving -- veered westward to intercept them. Cattle towns like Abilene, Wichita, Ellsworth, Caldwell and Dodge City enjoyed a brief heyday of prosperity (and violence). Later trails headed even further north to Ogallala, Cheyenne, Glendive and Miles City.

By 1886, the open-range cattle business had spread across the Great Plains and merged with cattle enterprises in Colorado, Idaho, Washington, Utah, Nevada, Arizona and California. The men who worked cattle on the treeless expanses of the West -- at least one-fourth of them were black men -- became known as cowboys. The image of the courageous, spirited horseman living a dangerous life carried with it an appeal that still refuses to disappear. Driving thousands of cattle hundreds of miles to market; facing lightning and cloudbursts and drought, stampedes and rattlesnakes and outlaws; sleeping under the stars and eating at the chuck wagon -- the cowboy became a true American folk hero.

Cattle ranchers staked out homesteads on the Plains, often centered in a cottonwood grove with ample water nearby. Their cattle grazed over thousands of acres of unclaimed land. This open-range industry, along with the great trails, was only ended by the arrival of barbed wire, a web of railroads throughout the Great Plains, and enforcement of federal land laws. By the mid-1880s, prudent cattlemen realized that the industry was over-expanded, the Great Plains overgrazed, and the price of beef declining. The Golden Age of the Cowboy was over.

Yet the myth still lives. Modern cowboys may ride a pickup truck with his horse in a trailer behind him. He may use a computer to determine his cattle's feed, weight and salability. But he still dresses like a cowboy, because the garb is practical. He still understands horses and cattle. He still gazes out over the treeless expanse, exactly as his predecessors did.


Photos from cowboyshowcase.com - photographer Verl L. Hunt (photographs of a cattle drive in 1918, just before barbed wire became popular in Wyoming)
Posted by JES Hays at 7:25 AM