I do love fashion - not necessarily wearing it, since I'm a jeans and tee shirt type for every day. But I do love seeing all the fancy gowns (not the excess craziness of Lady Gaga, of course) worn at all the major award ceremonies, and I have several bookshelves devoted to fashions from the past. I love delving into the shifts in fashion throughout history.

But Sarah McNeal put an idea in my head with her comment a few months ago when I wrote about The Hourglass Figure. Here's what she said: "One thing I find fascinating about clothing from the Victorian age and the flappers is the extreme attention to detail--embroidery, crochet, lace, tassels, smocking, and so on. Their clothing were works of art." Bingo! So let's explore some "works of art." Especially lace - I love all the patterns, the gorgeous edgings and every tiny swirl below. 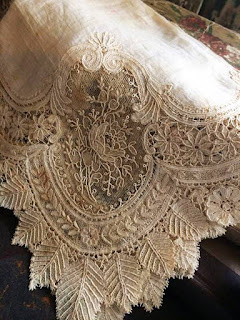 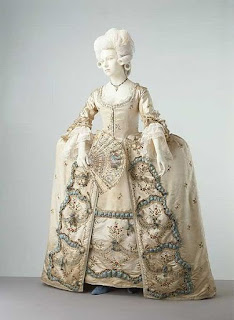 The Renaissance brought on the era of lace (hand-tatted, of course, by seamstresses and pieceworkers). Queen Elizabeth I wore it with style. Due to its expense, the nobility kept it fairly exclusive. But during  the 1700's, more details came into fashion. Think table-wide panniers, silk and satin fabrics, embroidery, embroidery, embroidery, powdered wigs for the ladies or elaborate updos, huge hats (even shaped like a ship, with rigging!) plus ribbons galore, heeled shoes, etc., for both men and women. And embroidery - did I mention all that embroidery? Look at that needlework! Even men wore lace and embroidered coats if they wanted to look presentable.

Knee breeches were the norm for men, with hose to show off the lower legs - erm, limbs. Long hair worn in curls, or tied back, or a powdered white wig covered the scalp shorn close of hair - pretty easy if the gent had a gene for balding hair. The jabot of lace fell over the long coat, and more lace showed below the sleeves. Buckled shoes of leather finished the look. And then came Brummel.

The Regency era (generally 1795 to 1837, during the mad King George III's reign, when his son George IV was Prince Regent, plus a few years after his death) changed fashion. For men - Beau Brummel ushered in the tailored look, tossing out the knee breeches (horrors!) for trousers - although the tall knee-high or higher boots definitely showed the curve of the le - limb! Cutaway coats with brass buttons, impeccable linen shirts and the cravat became the norm. Gloves of kid leather were a must, and top hats of beaver fur (oh yes, the Hudson Bay company would make huge amounts of money on that trade) replaced the tricorn hat of felt. Handkerchiefs may have lost the lace edging to match the more masculine look.

Women's garments turned slender - think Jane Austen's heroines in their Empire waists, narrow skirts (doorways were no longer a problem after losing the panniers, although they seemed handy at the time as an elbow rest), with day gowns of less sumptuous fabrics. Tiny prints or pale plain colors replaced the embroidery, although trims still held sway. Especially on bonnets for ladies.

And then came the Victorian era. 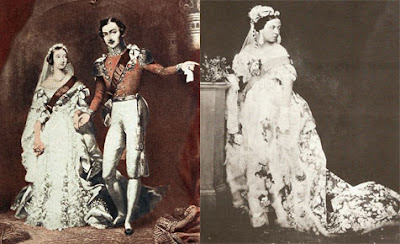 There she is, the Queen of England with her beloved Prince Albert (of the can). Fashion went into overdrive both in England, France, and America. A lot of it depended on the economy - see the chart to the left. Women's skirts widened to the point of those ridiculous hoops up until (and during, if you could make due with green velvet draperies a la Scarlett O'Hara) the Civil War. Excess fabric gradually moved toward the backside with bustles; fashions ended up slenderized again at the end of the century. But frou-frous went crazy - gowns of lace, silk, satin, wool, moire, etc. More lace trim flowed, along with tassels, ribbons, fringe, seed pearls, beads, sequins, you name it.

Real flowers decorated skirts, bosoms, and hats, to hand-sewn silk or satin ribbon flowers that lasted far longer. Seamstresses hired women to fashion these delicate blossoms separately or in bunches, and proved to be true works of art. Look at all that detail! You won't find such luscious stuff on gowns at the Oscars now. What a shame, really. 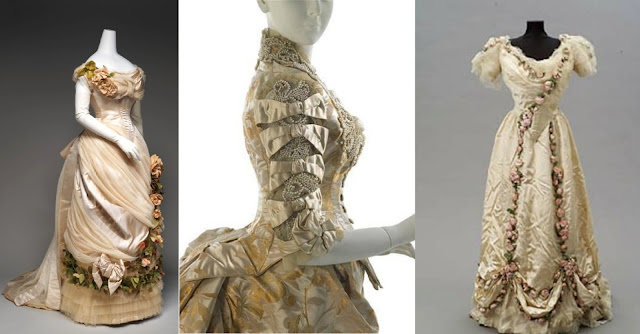 What about in the old west? Women certainly loved the femininity of lace or even a flounce or two on a skirt. If they couldn't afford to buy it, they sewed, knitted, or tatted their trims by hand. And men who visited the houses of ill repute expected the "doves" to wear their fanciest corsets, petticoats, and garters. Edwardian fashions of the early 1900s continued to embellish women's clothing with lace, floral ribbons, and more.

Throughout the 1900s, the Renaissance Fairs and steampunk fads, and the early 21st century with the resurgence of lace parasols, hats, fascinators, and the like... women and men just love to dress up.

Mystery author Meg Mims earned a Spur Award from WWA and also a Laramie award for her western historical mystery series, Double Crossing (still 99c!) and Double or Nothing. Meg is also one-half of the writing team of D.E. Ireland for a mystery series featuring Eliza Doolittle & Henry Higgins for Minotaur books. Book 2 just came out, MOVE YOUR BLOOMING CORPSE. Book 1, WOULDN'T IT BE DEADLY, was nominated for a 2015 Agatha Award. Meg lives in Southeastern Michigan with her husband and a sweet Malti-poo. She loves reading and writing novels, novellas and short stories, both contemporary and historical. 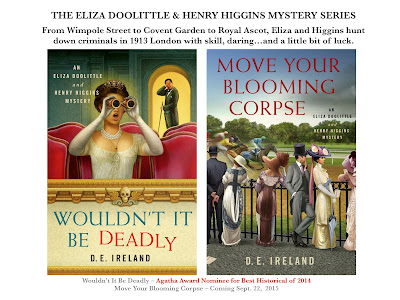