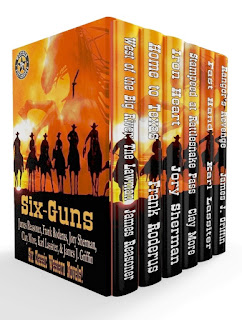 Six classic Western novels. The good old shoot-'em-up westerns are still around, and this collection has six by the masters of the genre.

William M. "Bill" Tilghman had one of the most illustrious careers of any Old West lawman, but he faced perhaps his greatest and most dangerous challenge when he rode alone into the wild Oklahoma Territory settlement of Burnt Creek on the trail of a gang of rustlers and outlaws with some unexpected allies . . . THE LAWMAN, by New York Times bestselling author James Reasoner, is the first novel in the West of the Big River series.

In Frank Roderus’ HOME TO TEXAS, Charlie McMurty brought a herd north, got a great price, and had enough left over once he repaid his neighbors to buy a ranch so he could ask for the hand of his sweetheart. Unfortunately, on the way back to Texas he was robbed and left for dead. To make matters worse one of his attackers was his friend he'd hired to help him with the herd. All he had left was a big debt back home and a big hole in his chest. His new quest became the need to be able to return his neighbor's money. First he had to heal and learn some fancy shooting.

Violence stole young Ben Brand's family from him, but blessed with uncanny speed and skill with a gun and befriended by an old mountain man, Ben sets out on a bloody quest for vengeance. As he tracks his enemies over the years and the miles, Ben battles men and the elements—and risks his own soul—to become the avenging nemesis known as Iron Heart! Long out of print and originally published under the pseudonym Walt Denver, IRON HEART is a classic Western from Jory Sherman.

Veteran author Clay More spins a fast-paced Western adventure in STAMPEDE AT RATTLESNAKE PASS. With her father murdered and her brother crippled by bushwhackers, half her herd stolen and her crew massacred by vicious rustlers, beautiful blond Elly Horrocks is going to have her hands full keeping the family ranch going. Luckily for Elly, drifting cowpoke Jake Scudder has a nose for trouble. It'll take all of Scudder's skill with guns and fists to save himself and keep Elly from being wiped out. Diamondbacks aren't the deadliest varmints in Rattlesnake Pass anymore!

Some men deserved to die like rabid animals. In FAST HAND the Thornberrys and their worthless cousin counted among those the world would be better off without. Judge Sebastian Hand sentences the Thornberry gang to the gallows for rape and murder. But when they escape, the judge trades in his gavel for a gun, and suddenly he's judge, jury, and executioner all in one. Karl Lassiter is the pen name of a prolific author who also writes under the pen name Jackson Lowry.

James J. Griffin's famous character Texas Ranger Jim Blawcyzk isn’t really working for the Rangers this time. In fact, he winds up on the wrong side of the law with the Rangers after him, because he takes off his badge and goes after the gang that attacked and possibly murdered his wife and son. As a result, RANGER’S REVENGE is a little grittier than Griffin’s earlier books, but it has the same fine action scenes, interesting settings, and welcome touches of humor.