This is yet another book that I am especially proud of and part of the reason is because of the unusual circumstances that brought it to fruition.  In November 2014, I was asked by Condor Publishing, Inc. to help another author, Denis J. Harrington, complete and rewrite a book entitled FIRE CANOE FINNEGAN.  He needed a co-author.
How could I say no to a title like that?  Upon reading the work, I truly liked the way Harrington outlined the book.  The very concept of steamboats helping to supply the western movement was intriguing, as well as original.  Before reading his rough draft, I never really thought of steamships carrying passengers, or supplying pioneers as well as the army forts along the great Missouri River.
I began working on the book, researching and adding historical accuracy.  I corresponded with Harrington and was pleased to be told that I had cart blanche with the manuscript.  In working with my co-author, I discovered he was a sports writer and playwright but that he had never before written a Western.  At this point in his life, he just wanted to see the book in print.  In July of 2015, I was informed my co-author Denis J. Harrington died.  The project took on a more serious tone after that and I worked hard.  It did need a tremendous amount of work and many rewrites.
When finished with the final draft, I started the editing process.  With my editor, this took three heated oral readings of 250 pages.  With each reading there were more changes.  Then, after completion the manuscript was sent off for a technical edit.  Sad to say, it came back with more corrections.  Finally, the manuscript was ready (or so we thought).  It was sent to the computer layout person for digital and print formatting.  When the first printed proof came back, I discovered four typos and THOSE had to be corrected.
Condor Publishing, Inc. has always insisted on quality over quantity.  From November 2014 to November 2015, it took a full twelve months to get this book rewritten, properly edited, and professionally formatted and published. 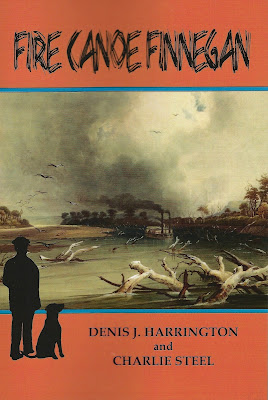 My publisher had the presumption to contact James Reasoner and ask for a possible review from this very busy writer.  I truly appreciate that he took the time to read and review the book.  This is what he had to say:
“FIRE CANOE FINNEGAN is a historical adventure novel in the grand tradition, a rousing tale of the men who piloted steamboats up the Missouri River to the Western frontier during the turbulent days after the Civil War.  Authors Denis J. Harrington and Charlie Steel spin a fine yarn with plenty of action, romance, historical detail, and compelling characters.  This is historical fiction at its finest and highly recommended.”  James Reasoner, author of OUTLAW RANGER and New York Times bestselling author of The Civil War Battle Series.
Picking an excerpt from this book, I found to be somewhat difficult.  It would be easy to pick a battle scene between Indians and soldiers, or a fight scene between Finnegan and a Sioux Indian.  Instead, I picked a little snippet of dialogue between the main protagonist Clint Finnegan and a pioneer named Liver Eatin Mosely.
Found beginning on page, 133:
“Then you were ambushed?” asked Finnegan.
Mosely nodded his head. “Sioux attacked just south of Westport Landing in Kansas. Most everybody got burned out. The folks that survived headed for Fort Leavenworth.  All save me.  I was going to California or bust trying.  So we kept on moving, looking to hook up with another wagon train.  We wandered up this way when fever took hold of my wife.  She was awful weak so I stopped here, thinkin we’d stay till the fever quit her.  But she up and died, leavin me and the boy.”
He closed his eyes in a prolonged silence.
“I’m real sorry to hear that,” Finnegan said quietly.
With a sigh, Mosely stared at the flames in the hearth.
“I played the fool, and she done the paying,” he said at length.  “Little John wasn’t but five.  I took him everywhere, huntin, fishin, plantin.  Why, I fixed a tent from hides and set it up alongside the wagon.  We lived there.  Early one mornin a war party jumped us.  They cracked my head, stole the mules, and fired the tent.  My boy was killed in the doing.”
Mosely’s face became an expressionless mask.
“That night I tracked them Sioux,” he continued.  “I found their camp up the river.  They were butcherin one of my mules.  Gonna make a meal of him.  I killed them all and got my mules back.  I’ve been goin at it ever since.”
“Did you…take any livers?”
“Not directly.” Mosely appeared to be at ease with himself now.  “I commenced that later.”  He leaned across the table.  “I learned about Indians from trappers traveling the river to Omaha.  They told me what spooks them. And cuttin out their livers does that right proper.  Scalpin does too.”
“How do you mean spooks them?”
“Well, Indians don’t like to lose parts.  They believe you can’t go to the spirit world if you ain’t in one piece.”
“So why do you hang those scalps on a pole?”
“They’re hangin there for a purpose,” Mosely explained.
“Aren’t you baiting them?”
“That’s the idea,” Mosely said, his anger rising.  “Young fella, this is a hard country.  A man what don’t look after himself is gonna be dead in a hurry.”  He gestured toward the woman.  “She’s Pawnee.  Tells me her tribes been enemies with the plains Indians since the beginning of time.  I come onto some Sioux trying to cut her up.  Naturally I had to kill em.”
“I see,” said Finnegan.
“She’s been grateful and a good friend ever since.  I trust her more than I do myself.”
“Do you mind telling me why you killed that Indian tonight?”
“Nope.  It’s because he’s been trackin me for a spell.”
“Tracking you?”
“That’s a fact.”  Mosely paused to pluck a bit of gristle from between his teeth with a knife.  “Like I been sayin, I’ve killed me quite a few Sioux.  And they ain’t happy about that.  I got most of the warriors skeered of me.  One of their chiefs named Hump took to sending his best after my hair.  This fella I got tonight was one of them.”
“Did you cut out his liver?”
“I did.  And I tossed his body yonder over the fence.  They’ll drag it off come mornin.”
“Wha…what did you do with the liver?”
“I gave it to the wolf.  He eats them.”  Mosely grinned.  “You look a bit pale, Clint.  Off your feed, are you?”
“You’re a hard man, Ab Mosely,” said Finnegan.  “So you cut their livers out just to spook them?”
“Yup, that I do.  Hate those Indians that killed my son with a passion. Pacho feels the same.  That’s why I do it.  I hear they claim I’m an evil spirit. To sum it up, they ain’t real anxious to fret me none.”
“I’m thinking you’re lucky you lived this long.”
“Tell the truth, I don’t care one way or t’other.”
“I have a question to ask you,” said Finnegan.
“Go ahead.”
“Did you happen to see the payroll thieves?”
“Maybe I seen them,” said Mosely.
“Really?” Finnegan stiffened.
“I said maybe. Two men was they?”
“Yes.”
“And a woman?” Mosely’s eyes narrowed.  “She one of the robbers?”
“No.  They kidnapped her.”
“Pretty is she?”
“Sure as the sun rises.”
Mosely chuckled.  “Could be you want to find her more than you do that payroll?”
Finnegan looked away and said nothing.
Well, that’s one excerpt from the book that I hope you find somewhat interesting.  I also hope I did Mr. Denis J. Harrington a good deed and that he is looking down on me kindly.  It is my fervent desire that everyone will enjoy this book.
All my best to all readers and fellow writers.
Charlie Steel

Posted by Charlie Steel at 5:12 AM