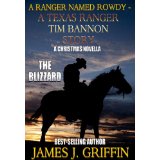 Howdy, and Merry Christmas to all... and a Happy rest of Hanukkah to any of my Jewish pardners out there.

This will be a kind of all over the place post. First, thanks one more time to Micki for putting together a great convention.

Since I don't fly, I drove to St. Louis, by way of Texas. Wanted to stop and see some of my friends there, plus the Texas Ranger Hall of Fame and Museum in Waco wanted mt to stop by, as they had put together a tribute to me for donating  a whole mess of Texas Ranger artifacts to the Museum over the past few years. Needless to say, I couldn't pass up that honor.  Of course, I hit Texas just in time for Hurricane Patricia. Despite being urged by Ranger Jim Huggins and Karl Rehn to turn back, I was already in Tennessee by the time I heard about the storm, so I kept going. It wouldn't have even been a hard blow up here in New England. It wouldn't have made a decent nor'easter. So, I got through with no trouble at all.

One of the highlights of the Texas portion of the trip was going to a house concert, which featured Mike Blakely, who is an accomplished western author, (I'm trying to persuade him to join Western Fictioneers), but is even more well  known as a songwriter and singer. When I told Karl and Penny I was going to be in Texas, and would they be home, they said they were going to a Mike Blakely house concert, and since I'd probably never heard of him I most likely wouldn't be interested. I replied that not only had I heard of Mike, I'd kill to go to one of his concerts. So, we did. It was up close and personal. Mike's a fantastic storyteller in song. You can see some of his singing on Youtube, or check out his website. Even better for me, I found out Mike is doing his first ever tour or the Northeast next fall, and he'll be doing a house concert at my place in Keene, NHas well as my friends Gina's and Dick's in Clinton CT. Keene will be Sunday, October 16th, at 5:30, Clinton on Friday, October 14th, at 7:00. On Saturday he'll be in Averill Park, NY. I'd like to invite any of you who might live up this way, or might be up here taking in the foliage, to join us. If you want to hear some of his songs in the meantime, I'd recommend Here's to Horses, Charlie Siringo, or for some powerful storytelling in music, The Last White Buffalo or Soy Cayuse Cimarron. The latter is a scathing indictment of the U. S. Cavalry at the Sand Creek Massacre.

I'll close with a picture taken a couple of years ago, on Hammonasset Beach in Madison, CT. It's a sunset scene of me, Yankee, and some friends, and it seems appropriate as the sun sets on another year gone back. A Happy and Healthy 2016 to all. 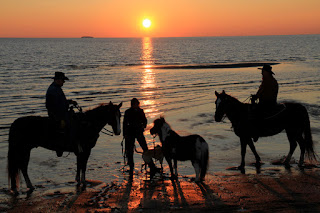