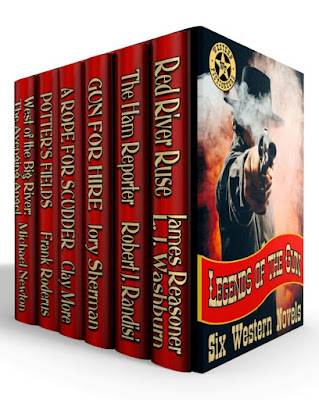 The good old shoot-'em-up westerns are still around, and this collection has six by the masters of the genre.

West of the Big River: The Avenging Angel by Michael Newton – Orrin Porter Rockwell is more than just a deputy United States marshal and a deadly gunfighter. He's a member of the Mormon Danites, the group of enforcers known as the Avenging Angels, and he's the personal troubleshooter for Governor Brigham Young. And when Young sends Rockwell to the rough-and-tumble mining town of Tartarus, there'll be plenty of trouble for him to shoot. Award-winning author Michael Newton spins an action-packed, historically accurate yarn in THE AVENGING ANGEL.

The classic, Spur Award-winning novel by Frank Roderus, POTTER'S FIELDS is the story of Joe Potter, a man haunted by the past who deals with the harsh realities of the frontier by becoming harsh and violent himself. A former lawman no longer able to find work carrying a badge because of his corruption and brutality, Potter becomes a cowboy and spends the winter in an isolated line shack, where the arrival of a stranger forces him to confront himself and his past. Rich with poignant emotion and vividly detailed ranch life, POTTER'S FIELDS is a novel that will stay with the reader long after the story is over.

Jake Scudder is just a drifting, peace-loving cowboy. So why does he find himself in jail, convicted of the murder of an old-timer he had befriended and sentenced to hang for that crime he didn't commit? Jake gets a chance to clear his name when the train taking him to the gallows crashes, but was that wreck an accident? Who's the real ringleader of the gang of vicious outlaws known as the Marauders? Jake Scudder has to dodge not only the law but also a cunning murderer as he attempts to save his own life and that of a beautiful young woman. A ROPE FOR SCUDDER is another classic, action-packed Western from bestselling author Clay More.

A fortune in gold dust, two beautiful women, a pair of deadly bushwhackers gunning for him, a dangerous blizzard, an avalanche, and an unknown plotter masterminding murder and robbery . . . These are just some of the things Clay Brand has to deal with when he signs on to guard gold shipments coming down from the mining country in California's San Bernardino Mountains. But before Clay can get to the bottom of the violence plaguing the mountains, he'll have to shoot straight and fast and escape the unexpected menace of a lynch mob! GUN FOR HIRE is the first Western ever written by acclaimed author Jory Sherman. Includes a new introduction by the author written especially for this volume in the Western Fictioneers Library.

In THE HAM REPORTER by Robert J. Randisi, Bat Masterson is no longer a sheriff in the Old West. He’s moved East to New York City where he gets a job as a sports writer for The Morning Telegraph. But when his friend and fellow-newsman, Inkspot Jones, disappears, Masterson’s wife Emma asks if he could look into it as a favor to the man’s wife. It doesn’t look hopeful—Inkspot had something on somebody, and that somebody may have decided to play rough. Pretty soon they’re up to their eyeballs in crooked politicians, hired thugs and a woman of mystery. And before it’s done, Bat may have to strap on his Colt again for some old fashioned Western justice.

Lawyer Billy Cambridge, a retired Texas Ranger, and his best friend, vaquero and ranch foreman Nacho Graves, set out by stagecoach from Pecos, Texas, to deliver $20,000 in cash to a client in Fort Smith, Arkansas. When the stagecoach is held up and Cambridge and Nacho lose the twenty grand, they set out on a dangerous quest to recover the money and bring the outlaws to justice…a quest that leads them to beautiful women, cold-blooded killers, the last Comanchero, and more surprises than they're ready to face. RED RIVER RUSE is a fast-moving Western novel packed with action, emotion, and danger, from award-winning, bestselling authors James Reasoner and L.J. Washburn.