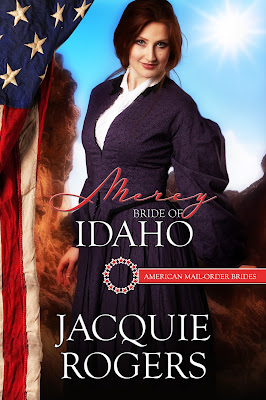 This series is unprecedented! 50 States, 50 Brides--yep, 50 Books written by 45 Authors, and released one book each day starting November 19th. Well, the wait is over because Mercy is finally here. All the books, including this one are on the Amazon Kindle Unlimited program so if you're subscribed, you can read the entire series for FREE. (The first four Hearts of Owyhee books are also available in KU.)

Also free to everyone is the Prequel by Kirsten Osbourne, so be sure to pick that up.

I was in Deadwood, SD, when Caroline Clemmons called me and told me I was going to write this book. Yes, that's what friends are for. Ha! I thought it was a crazy idea but if Caroline thought it was a good deal, I was in. The concept came from the awesome (and zany) Kirsten Osbourne, and I thought this series was wild enough that it just might work.

It has!!!  So far, American Mail-Order Brides has been a fabulous success and I hope Mercy: Bride of Idaho carries banner, too. Mercy Eaton is the younger sister of Caroline's heroine in Patience: Bride of Washington (American Mail-Order Brides #42), so if you haven't read that book, you'll definitely want to get it.
Mercy: Bride of Idaho
One woman bent on saving her family.
One rancher determined to save his own heart.
Is her love enough to save them all?

So what was happening in 1890?  I really didn't know since all my books have been earlier than that so I'd never researched that decade.  Here are a few tidbits that I included in this book--some from that time and some from earlier. 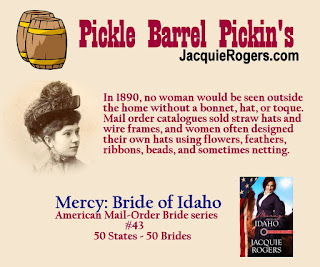 Mercy is a seamstress but it seemed only likely that she'd be making her own hats. 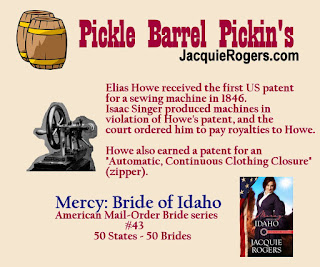 I knew that Elias Howe had invented the modern sewing machine but I didn't know that Isaac Singer had been court-ordered to pay royalties to him. 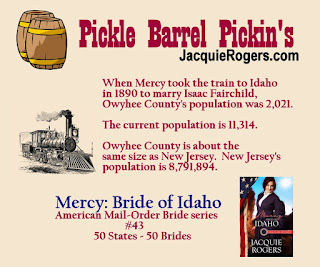 Mercy is a city girl from Lawrence, Massachusetts.  Coming to Owyhee County would have been quite a culture shock, both in climate and population.

Mercy: Bride of Idaho is connected to the Hearts of Owyhee series even though it takes place much later, because Jake O'Keefe, the heroine in Much Ado About Mavericks (Hearts of Owyhee #4) is the mentor to the hero.  And his ears are still ringing.

Posted by Jacquie Rogers at 7:11 AM