The coyote has been a mythological creature in Native American culture for thousands of years. These members of the dog family are highly adaptable and clever. Your characters would certainly have encountered the coyote in their day-to-day lives.

Coyotes are smaller than wolves – about as large as a medium-sized dog. They measure 32 to 37 inches, head to rump, and their bushy tail adds another 16 inches to their length. They typically weigh between 20 and 50 pounds. They have elongated snouts, lean bodies, yellow eyes, and thick fur. The fur can be gray, white, tan or brown depending on where the coyote lives. Mountain coyotes have darker fur than desert coyotes. They can run up to 40 miles per hour.


Nocturnal animals, coyotes hunt at night and communicate with one another by howling. They are anything but picky eaters, consuming small game such as rodents, rabbits, fish and frogs, and larger game like deer. They’ll also eat snakes, insects, fruit, grass and even carrion. Usually solitary creatures, they will form packs in the Fall and Winter and hunt together to take down larger game. 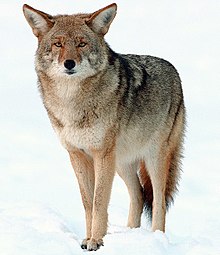 In the Spring, female coyotes will start to build dens for their pups. Breeding season is in February and March, and the gestation period is 63 days. Females will give birth to anywhere between three to twelve pups, depending on the local coyote population. In more crowded areas, they give birth to fewer pups. Both the male and the female care for the pups. The male coyote hunts for the female and protects her and the pups. The female stays in the den until the pups’ eyes are open, which usually takes eleven or twelve days.

By Fall, the pups are old enough to hunt for themselves, and are ready to mate at 20 to 22 months. In the wild, coyotes live around ten years. 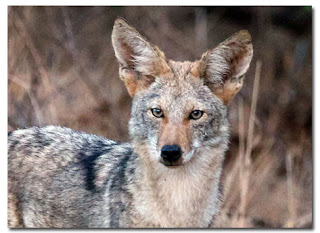 Because they sometimes kill young livestock and pets, many people consider them pests, but they also reduce the population of such true pests as rodents and insects. You’ll have to decide how your characters view the “wily” coyote.