"ONE TENACIOUS MANHUNTER" by Tom Rizzo

Despite the demands on frontier lawman, I’ve always been amazed at how many ended up in court defending themselves for carrying out their responsibilities. Of course, every profession has a bad apple or two, three, or more. But one of the most effective law keepers was Sheriff George Scarborough. 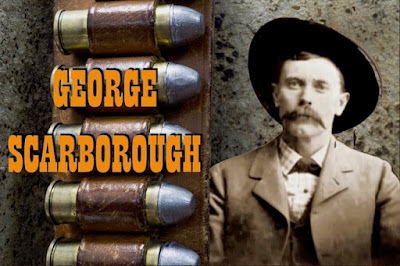 In the fall of 1887, Sheriff George Scarborough sat in a Haskell, Texas, saloon with his back to the doorway writing a letter to his wife. He glanced up at a mirror on the wall and happened to see an outlaw he had been pursuing for three years walk through the door.

The Jones County, Texas, lawman had crossed paths twice before with A.J. Williams, the leader of a gang of cattle rustlers operating in the area. Scarborough once tracked Williams and a couple of gang members to a ranch in Lincoln County, New Mexico Territory, but Williams escaped.

Scarborough returned a second time, captured him again, and returned him to Jones County. But Williams staged a breakout. Although he was recaptured, the five-foot-eight gang leader, with coal-black hair and cold gray eyes, eventually made bail and skipped town. 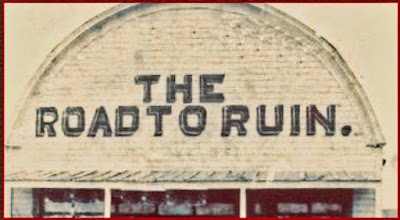 According to a witness, when Williams walked into the "Road to Ruin Saloon, he spotted Scarborough and drew his gun.

Before he could fire, Scarborough spun around, gun in hand, and killed the outlaw with one shot.

Another account says Scarborough's brother fired several shots at William. Both the sheriff and his brother were arrested and charged with murder. The jury took less than five minutes to return a verdict of not guilty.

Following other shooting incidents, Scarborough lost a bid for another term as sheriff in 1888. He moved to Deming, New Mexico, where he worked as a hired gun for the Grant County Cattlemen's Association.

Five years later, Scarborough accepted an appointment as a deputy United States Marshal for the Western District of Texas.

Scarborough had little formal knowledge of law enforcement and relied mostly on courage and common sense to make it from one day to the next.

During his career, he built a reputation as tenacious Manhunter who had no quit in him. Once, he arrested a suspect in a murder case committed twenty-eight years earlier.

According to Robert K. DeArment, in his book, George Scarborough: The Life and Death of a Lawman on the Closing Frontier, the frontier peace officer seemed to leave a lasting impression on others. Most remembered him as a big man with black hair and long, flowing mustache. In reality, Scarborough stood under six feet, weighed about 150 pounds with brown hair. He did, however, wear a mustache.

Attorney J.F. Cunningham, who spent fifty years in Texas courts, praised men like Scarborough as among the best of their time, "as game as any men I ever knew."

Despite the respect and admiration, Scarborough spent plenty of time in court defending himself against murder charges for carrying out his duties as a lawman.

On June 29, 1895, he and two fellow officers killed a Texas cattle rustler Martin Morose. Once again, Scarborough was arrested, went to court, and won an acquittal.

The following April, he got involved in another killing, this time in El Paso Texas. His victim: John Selman, the gunman who killed John Wesley Hardin with a bullet to the back of the head while Hardin stood at the bar of a saloon. 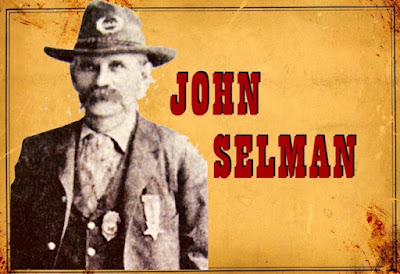 For the third time, Scarborough stood trial for murder. Although acquitted, he agreed to resign as Deputy U.S. Marshal.

During a gun battle with cattle rustlers in San Simon, Arizona, on April 5, 1900, Scarborough got wounded. After being transported to his home in Deming, the lawman had his leg amputated.
The following day, George Scarborough died. He was 41.

Read Tom's Blog for stories of: