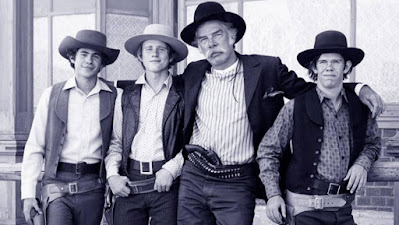 Lee Marvin had star power in droves. I sat through The Spikes Gang, an episodic western, and was never bored when he was on screen. That’s not to say the other actors were slacking because everyone turns in heartfelt performances—including cameos by Arthur Hunnicutt and Noah Beery, Jr. It's just that Marvin is one of those heavy hitters, like Robert Mitchum or Katharine Hepburn, that chews up every frame he graces. I promptly forgot the screenplay's limitations that plays more like a television movie of the week than a vehicle worthy of a legend who starred in some of the best westerns of his time: The Man Who Shot Liberty Valance (1962), Cat Ballou (1965), Monte Walsh (1970) and my personal favorite, The Professionals (1966).

The plot concerns impressionable Will, Tod, and Les (Gary Grimes, Charles Martin Smith, and Ron Howard), restless teens, who come to romanticize Harry Spikes (Marvin) after finding him near death and nursing him back to health. Eventually they throw in with the charismatic outlaw but instead of high adventure, that Spikes promises, they wallow in hardships, blood, and bank robbing that goes more often awry than turning any kind of sustainable profit. Along the way, they come to realize, too late, that Spikes is no one to admire. The Spikes Gang is based on The Bank Robber, a novel by Giles Tippette, that I'll probably track down at some point. I suspect based on the discursive story that made it to the screen that I'd enjoy the book even more.

Posted by David Cranmer at 6:30 AM