October 9 is World Post Day, celebrating the anniversary of the Universal Postal Union, established by the Treaty of Bern in 1874. Before the establishment of the Postal Union, every pair of countries that exchanged mail had to negotiate a postal treaty with each other. These negotiations could sometimes drag on for years. The United States took the lead in 1863, calling for improvements to international mail arrangements, but the first International Postal Congress failed. Then, in 1874, Heinrich von Stephan, Postmaster-General of the German Reichspost, called for another congress, during which the 21 delegates agreed to all of von Stephan’s proposals.

The treaty provided that:

1.     There should be a uniform flat rate to mail a letter anywhere in the world

2.     Postal authorities should give equal treatment to foreign and domestic mail

3.     Each country should retain all money it collected for international postage. 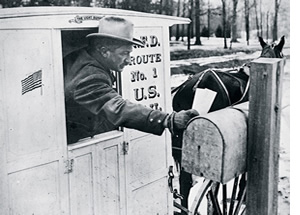 In 1845, the Department began charging rates based on weight and whether a letter was going more than or fewer than 300 miles. In 1851, the distance limit for the lowest rate increased to 3,000 miles, which included most of the United States, while an even lower rate was charged if postage was prepaid. In 1855, the prepayment of letter postage became mandatory (previously, postage could be paid by the sender or the recipient, or partially by each).

At first, envelopes were rarely used, as they would count as another sheet of paper. Instead, the sender simply folded the letter so that a rectangle on the outside was blank, wrote the address there, and sealed the letter with wax. To save space, people usually filled one side of the sheet of paper, then turned the paper 90 degrees and wrote cross-wrote the rest of the letter to fill in the blank spots. Postage stamps were invented in 1847 and became mandatory in 1856.

On March 3, 1863, U.S. postage was charged based on letter weight, without consideration of distance. The same act that decreed this also created three classes of mail:

·      Newspapers and other periodicals (Second-Class Mail)

·      All other mailable items (Third-Class Mail) 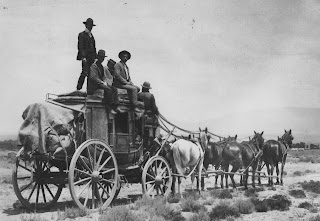 In 1800, the speed of the U.S. mail was limited by natural forces like wind, water currents, or a horse’s pace. By the end of the century, mail trains were crisscrossing the country with postal clerks aboard, sorting mail in transit. In between, the Postal Service utilized whichever form of travel was speediest and most dependable: steamships, stagecoaches, trains, and horses. Perhaps the most famous of these delivery services was the Pony Express, in operation from April 1860 to October 1861. It ended when the first transcontinental telegraph line was completed, but during those 18 months, the young riders made history.

Railway mail clerks had one of the most dangerous jobs in the postal service. They worked elbow-to-elbow on the fast-moving cars, trying to accurately sort the mail before they reached the next destination. Often the train wouldn’t even stop – the clerks had to toss the mailbags out the car’s window while snagging the town’s mailbag on the fly. Until the 1920s, most mail cars were made of wood, lit by oil lamps and heated with woodstoves. They were also sandwiched between the heavier locomotive and passenger coaches, which made the mail car vulnerable in case of a wreck. Trains derailed because of livestock on the track, open switches, broken rails, washed out bridges, and oncoming trains (to name only a few hazards of rail travel). Even a sudden lurch could injure a clerk if he lost his balance.

The first mail contractors were on horseback, but in 1785, the Continental Congress instructed the Postmaster General to award mail transportation contracts to stagecoach lines, which were preferred over horseback even though they cost more and were sometimes less efficient. In March 1845, an act took steps to reduce mail transportation costs. Congress offered contracts to the lowest bidder for “what may be necessary to provide for the due celerity, certainty and security of such transportation.” These were known as “celerity, certainty and security” bids, but postal clerks shortened it to three asterisks (***) or stars, and they became known as star bids. The routes were then called star routes. Still, throughout the 1850s, the Department kept on preferring stagecoaches to horseback over some routes.

In 1859, Postmaster General Joseph Holt criticized the “enormous sums” paid to stagecoach companies to transport mail. He declared, “In advertising for the new lettings, ‘Star Bids’ … will alone be invited … without any designation of modes of conveyance.” The 1860 annual report is the last one to discriminate between “coach” and “inferior” modes of transportation. Contractors had to be at least 16 years old (until 1902, when the age was raised to 21), and were bonded, having taken an oath of office. Until 1865, carriers must be free white persons, and their typical four-year contract didn’t provide payment for missed trips (regardless of weather conditions). They provided their own equipment, too. Most star route carriers traveled by horseback or horse-drawn vehicle, with the odd boat, sled, snowshoe, and ski thrown in during the winter. Dogsleds were used in Alaska until 1963. 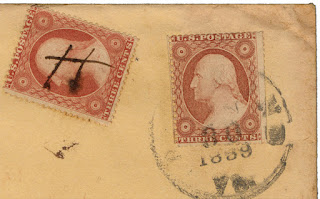 If your character utilizes the Postal Service for any reason, consider the travel time and danger involved in its delivery. One thing for certain: your character wouldn’t be able to expect same-day delivery!