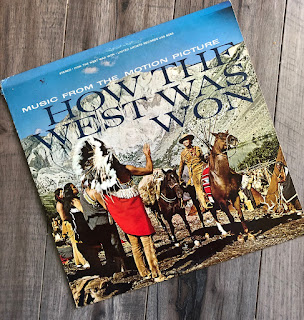 My copy of the United Artists LP, produced by the Hollywood Sound Stage Orchestra, features linear notes by Norman Weiser, president of Chappell Music Company of New York, part of London’s Warner-Chappel, the world’s largest music publisher. Weiser says “The music has the potential of long-span popularity for it has been critically acclaimed as one of the best motion picture scores to be heard in many years.” Weiser wasn’t wrong, in 2005, the score was listed at number 25 on the American Film Institute’s 100 Years of Film Scores.

Composed and conducted by Alfred Newman and originally released by MGM Records, the music was nominated for an Academy Award by lost to Tom Jones.

The movie’s story is told through a series of five vignettes: The Rivers, The Plains, The Civil War, The Railroad, The Outlaws, spanning 50 years and following four generations of the Prescott family as they move west from New York. What makes the full-length score so spectacular is the way Newman arranged for particular styles of music to play off specific settings.

This clip, the original recording by the MGM Orchestra is sweeping in its majesty, energetic and fun. Just like the film.

Debbie Reynolds sings three songs in the film, “Raise a Ruckus Tonight,” “What Was Your Name in the States?” and “A Home in the Meadow” to the tune of “Greensleeves.”

The original selections on my United Artists LP are rounded out with Newman and Ken Darby’s arrangements of traditional tunes, “When Johnny Comes Marching Home,” “I’m Bound for the Promised Land,” and “Battle Hymn of the Republic.”

Compared to the original recording in the clip above, the Hollywood Sound Stage Orchestra version of the theme I have here is anemic at best, and just goes to prove the old saying of Let the Buyer Beware — “Music from the Motion Picture” might be stretching the truth.

After growing up on a Nebraska farm, Richard Prosch worked as a professional writer, artist, and teacher in Wyoming, South Carolina, and Missouri. His western crime fiction captures the fleeting history and lonely frontier stories of his youth where characters aren’t always what they seem, and the windburned landscapes are filled with swift, deadly danger. In 2016, Richard roped the Spur Award for short fiction given by Western Writers of America. Read more at www.RichardProsch.com
Posted by Richard Prosch at 1:00 AM