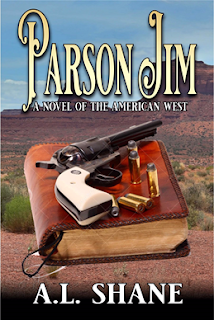 Cowboy James Martin was nicknamed Parson Jim because he carried a Bible in his saddlebags. However, Martin turned out to be anything but godly. He killed Cocheta, the beautiful Creek Indian wife of Abilene Marshal Ed Bright, and later shot two cowboys who worked for rancher John Chisum. Then he fled to Indian Territory.

Marshal Bright and Pete Butterman, Chisum’s foreman, began the search for the murderer.  With the help of Standing Bear, chief of the Creek Nation, and Red Eagle, a Creek warrior, Marshal Bright finally catches up to Parson Jim who was hiding with a rogue sheriff in Broken Arrow.

The colorful characters, the inevitable showdown and surprise ending will keep the reader flipping the pages of this exciting story.