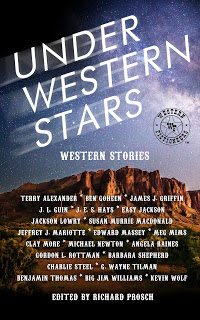 If short stories are my first and best love, then short westerns are that magical summer affair that seems all too rare and fleeting.

For the most part, they’re treasures dropped in from another time. An era when somebody like Elmore Leonard could dash off a yarn for the slick magazines and be paid a decent amount—and maybe even get a movie option out of the deal. A time when a man (or woman, for that matter) could feed a family of four on a monthly production schedule of four or five tales.

In 2020, besieged by a global pandemic and a contentious political climate, Western Fictioneers set out to rekindle that magic. We set out to tackle the darkness head on—with stories about the dead of night.

In the shadow of the earth, under western stars, our characters lived and breathed, laughed and cried, slapped leather, spurred dirty broncs and rowdy mounts, and lit a bonfire for each of us who contributed. I’m surely not alone when I say that contributing to this collection was one of my summer’s high points.

Now, as autumn leaves begin to blaze new color through the trees behind my house, releasing this collection to the world is even more of a joy.

ALL proceeds for the book go back to Western Fictioneers. None of us are being paid for the work we're doing. It’s truly a labor of love.

Posted by Richard Prosch at 1:00 AM