What’s Your Favorite Western Set in the 20th Century? 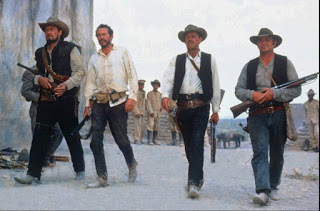 Do you have a favorite western movie that was set in the 20th century? For me, there are a lot to choose—I especially like Don Siegel’s The Shootist (set in 1901; released in 1976) and Sergio Leone’s Duck, You Sucker! (set in 1913; released in 1971). But at the top of my list would be The Wild Bunch (also set in 1913; released in 1969). This revisionist western was directed by Sam Peckinpah, starring William Holden, Ernest Borgnine, Ben Johnson, and Warren Oates as aging outlaws being tracked all the way across the Rio Grande by a former friend played by Robert Ryan. The cinematography, acting, and violence all ring true. The film never ages.