Post by Doris McCraw
writing as Angela Raines
Many people talk about Andy Adams and his writings. Many speak in fond terms about his book, "The Log of a Cowboy". Manly Dayton Ormes (yes, that's his real name) in his book, "The Book of Colorado Springs" wrote the following about Adams:
Andy Adams, another of our own, came to Colorado during the Cripple Creek gold excitement, after his Texas cowboy life. He took up mining and story writing; he lost a fortune in the first venture but retrieved at least part of it in the second; after he wrote "The Log of a Cowboy", his work was sought far and wide. His insight into cattle life "was not obtained from a Pullman car window, but close to the soil, and from the hurricane deck of a Texas horse." These are his words. He tells of seeing one night after his money was gone, Charles H. Hoyt's "A Texas Steer." The opera house was crowded with a delighted audience. With his 20 years in the West, 12 of them in the saddle, he told Henry Russell Wray, who was a great friend of his, that he felt he could contribute something of the real romance of the cattle trail which should please the public even more than the sensationalism of "A Texas Steer." So being encouraged by his friend, he tried his hand and one. He has since lived here, an interesting figure connecting present and past.
Yes, the iconic book, "Log of a Cowboy", if not written, was probably finished in Colorado Springs, Colorado, and published in 1903. The play of Hoyt's he spoke of played in both Pueblo and Leadville around 1900. In 1903 he was rooming in the St. James Hotel. He later moved to The Albany Hotel, which was built in 1902, where he remained until his death in 1935.


The local papers would note when Mr. Adams was writing another book. He was a celebrity in what was then a modest-sized town. Yet, almost all speak of Adams with great affection. Of Scotch/Irish heritage, Adams was six foot tall and was said to have a kindly smile and modest manner. The biographical/obituary articles after his death had this to say:
He did not give the impression that he was one of the world's greatest literary figures either. With his rather wide-brimmed Stetson, his black string tie, and slightly oversized caller, he seemed more the big ranch owner or foreman than one who had written the finest novel of the cowboy and the trail that has ever been written. Like his friend Rhodes, he did not regard the writing of a good book as constituting any greater distinction than the writing of a good horse or the capable driving of a trail herd.
And he rarely "talked literature." He alluded once in a while to the novels by Rhodes and Hough, as he mentioned now and then the paintings by Russell and Charles Craig, because he admired them and saw in them true portrayals of the West and the cattle range as he knew them. But literature as a thing separate from reality met little if anything to him.
"I don't know anything about fancy writing," he said once, "any more than I know about this fancy writing you see in the pictures. When I sit down and write I go about it the best I can, tell what I have to say and quit. That's the way I did when I wrote a horse. I leave the fancy stuff to the fancy fellows."
Which is one of the reasons why Andy Adams was a great — a great writer and a great cowman.


In 1923 Adams received a letter from a Mr. B. Youngblood from the Texas Agricultural  Experiment Station in College Station, TX. requesting some biographical information as they were using his books to teach about Texas ranch life. Adams reply read: 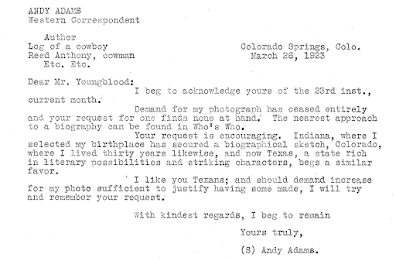 Adams had joined the Masons after moving to Colorado. He is buried in Evergreen Cemetery in Colorado Springs.  He died on September 26, 1925, of a heart attack, the following was posted in the biography/obituary that appeared in the paper:
Andy Adams, the last of the great cowmen who abandoned the cattle drives and roundups to travel the trails of Western literature and art, has gone to join the other members of that noble brand — Emerson Hough, Charlie Russell, an old Gene Rhodes. Andy headed down the last trail early yesterday morning.
"Just get an early start, well before sunup, as any good cowboy out to do," he himself would probably have said that had he known that the bars were down for the last, lone trek.
Though his death was unexpected by his friends, he himself seemed to of had a premonition that the end was near. Only a few days ago, when informed in the course of one of those short walks he was in the habit of taking daily, that his health appeared to be improving, he smiled and asked, "Do you really think so?" Then he shook his head. "The old pump's worn out," he said. "I'll have to junk it one of these days."
But he didn't look as if the "old pump" was worn out. Large of body, full of determination to keep going, he did not give the impression of a man who stood at the brink of the grave.
Thus ended the days of Andy Adams, a writer many know, and an unknown to so many others. Yet, like all writers, his words live on in the stories he told.
For those who might be looking for an ebook copy of "Log of a Cowboy". There are also newer versions and paperbacks.