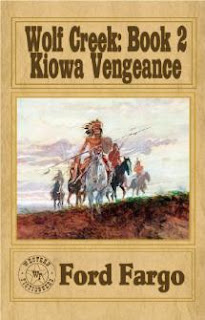 Several months after an outlaw raid left the residents of Wolf Creek, Kansas, bloodied but not broken (Wolf Creek Book 1: Bloody Trail), a band of renegade Kiowa hits the warpath just as the main body of the tribe is about to talk peace with the army at a nearby fort. The renegades, a brutal, savage bunch, spare no one as they cut a swath across the prairie on a collision course with a town woefully unprepared to fend off a full-scale Indian attack.

Book 2 in the Wolf Creek series might be subtitled “Blood All Over the Place.” In chapters penned by (in order) Bill Crider, Jackson Lowry, Kerry Newcomb, Troy D. Smith, Frank Roderus, and Robert J. Randisi, readers are sucked right into the action by new characters and a couple of favorites from the previous volume. Danger is more palpable in this novel; the pacing much quicker. Readers whose pulse doesn’t pound for a good portion of the tale might want to make sure their scalp is still intact.

Without exception, the new characters in Kiowa Vengeance are fascinating. No one is what he or she seems, and that ought to make for some interesting stories in future books. Keep an eye on Wilson Marsh, who emerges as the sort of oily slug it’s easy to detest. There are precious few glimmers of deeper humanity in that character, so one wonders where he may go from here.

The resolution seems a tad too easy, but by then readers will be thankful for a reprieve from non-stop action. Kiowa Vengeance is great fun on both emotional and intellectual levels. 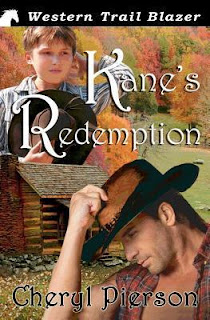 A 10-year-old boy witnesses the brutal murder of his family during an Apache raid on their homestead. Taken captive by the Indians, Will Green resigns himself to torture and death, only to be rescued by a mysterious, haunted man whom he grows to love.

Readers avoid stories for all sorts of reasons, most of them idiosyncratic. For me, two things that engender a healthy amount of skepticism and avoidance are first-person narration and stories told from a child’s point of view. I’ve seen far too many authors handle both badly, at least in my opinion.

With that bias in mind, I was stunned to find myself captured by the first two novellas in Cheryl Pierson’s Kane series. Pierson falls into none of the major traps often presented by first-person narration and children’s perspective. Will’s voice is enchanting: honest, determined, confused, desperate, vulnerable, and amusing. He leaps right off the page and into the reader’s heart almost immediately—the type of kid one wants to hug and throttle, sometimes simultaneously. At his best, Will evokes comparisons to Mark Twain’s Tom Sawyer and Huckleberry Finn: an old soul in a child’s body, covering vulnerability with bravado.

Though both novellas are packed with grit and action, one of the of the most striking things about the Kane stories is Will’s gradual realization that “family” can be an evolving concept. Will loved his slain parents and sister, and he remembers them mostly with fondness. Not until he begins to bond with the titular character, Jacobi Kane, though, does he begin to acknowledge his family had as many warts as any other. Will’s father was a good man and a good father, but according to Will, Pa Green considered even minor displays of affection unmanly. That throws Will, at first.

Larger-than-life Jacobi Kane never misses an opportunity to pat Will on the head or offer a kind word. Kane has suffered enormous losses, too, and he imposes artificial distance between himself and the boy. With a child’s guileless frankness, Will sees through the effort, and watching the two wounded characters grow into a new kind of family is heartwarming.


Kathleen Rice Adams is a Texan, a voracious reader, a professional journalist, and a novelist in training. She purchased Kane’s Redemption and received review copies of Kiowa Vengeance and Kane’s Promise from the publisher and author, respectively. Her opinions are her own and are neither endorsed nor necessarily supported by Western Fictioneers or individual members of the organization.