The title came first—Town Tamer—though that’s not what the novel is now known by. 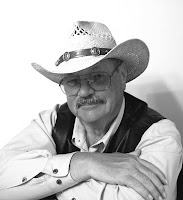 I saw a group of five riders coming into a town, and I knew they planned to take it over. Here’s a paragraph that tells the reader what kind of man Nate Cahill is.

The mist dripped off Cahill’s slicker and from the brim of his black Stetson. His sharp gaze picked up a comely woman in blue calico coming from a small building with Examiner painted on its window. Maybe she’d still be around when he owned the town. He’d see how she tasted then. Their eyes met – his cold and calculating, hers bold and forthright. Cahill raised a finger to his hat brim in salute. She looked away. He grinned.

The girl, a reporter for the Examiner, plays an important part, too.

Cahill is a hard man, and he knows how to run his gang well. He’s got a brother, though, who’s a sadist. Here’s what Cahill says about him:

An angry voice came through the thin walls. “He’s what? You’re jerking my leg. I’m the goldam owner of this goldam saloon.” Angry stomps marked Sims’s progress down the stairs. He burst into the room, a big man in gartered sleeves and suspenders. His belly hung over his waistband and jowls flapped at his neck. He held a Smith and Wesson in his right hand.
“Who the hell are you?” he shouted. The revolver pointed more or less at Cahill.
“I’m Nate Cahill, and this here’s my brother Wynn. Now before you get sudden, let me tell you about Wynn. He’s not like other people. You see, Wynn likes to hurt things. Cats. Dogs. Women. Men. Don’t matter much to him, long as they yowl.”

Then you get another look at what kind of person Wynn Cahill is a little farther into the first chapter.

Webber took a deep breath. “I’m the one with the badge, Cahill. This may be Bogtown, but it’s still part of Ponderosa, and I’m the law.”
Cahill smirked. “That so? You figure there’s some way to make me open that safe for you?”
“There is.” Webber eared back the hammers of the sawed-off shotgun, but the moment the marshal’s hand moved to the hammers, Wynn Cahill palmed his Colt and shot Webber just below the breastbone. Webber stumbled backwards. His dying fingers triggered the shotgun into the ceiling. He fell on his back, his head crashing on the hardwood floor.
The Cahills watched as the marshal tried to suck air into his punctured lungs while his dying heart pumped blood out his ruptured pulmonary artery into his chest cavity. His heels beat a weak tattoo on the floor; then he went limp.
“Damn,” Wynn said. “Why’d he have to die so quick?”

Isn’t he the kind of guy you love to hate? While Jake Cahill is coldblooded and calculating, younger brother Wynn gets his jiggers from hurting things. Still, these are tough men, so there’s not doubt in the reader’s mind (I hope) that it will take tough men to clean these vipers from Bogtown, Ponderosa’s underbelly.

The Cahills are villains people love to hate. Next month, I’ll talk about antagonists who think they are in the right.

OK. Now give me some comments about villains, and I’ll give one of the commenters a PDF of Guns of Ponderosa, the novel these scenes were taken from (I’d give you a signed copy, but I don’t want to send it all the way from Japan, cheap rascal that I am).
Posted by ChuckTyrell at 7:05 AM